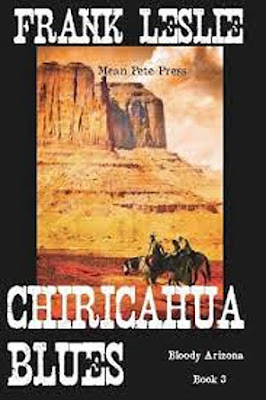 Half-breed lawman Yakima Henry and the rest of his friends and enemies in the town of Apache Springs are back in CHIRICAHUA BLUES, the third book of Peter Brandvold's epic four-part series BLOODY ARIZONA. In this novel, Brandvold (writing under his familiar pen-name Frank Leslie) follows two storylines. In Apache Springs, Marshal Yakima Henry deals with the arrival of the long-awaited spur railroad line, as well a new threat to the mysterious old Spanish mission filled with gold that's played a part in the previous books. At the same time, Yakima's deputy, the reformed outlaw known as the Rio Grande Kid, is trying to deliver a prisoner by stagecoach, only to have the coach attacked and pursued by vengeful Apaches out to kill the Kid's prisoner and anybody who gets in their way.

As always in Brandvold's work, action abounds, and nobody in the business today writes better action. Also, Yakima and the Kid are both very likable characters, and the on-going romantic triangle involving Yakima and the Kosgrove sisters, Julia and Emma, is as intriguing as ever. These are great stories told in a distinctive voice, and I really enjoy them. CHIRICAHUA BLUES gets a high recommendation from me.

Sounds great. Time to catch up on my Mean Pete reading!

Thanks for introducing me to this. Read the first and really enjoyed it. I have enough pulps to keep me busy and rarely pick up recent stuff but am glad I did. Loved it.