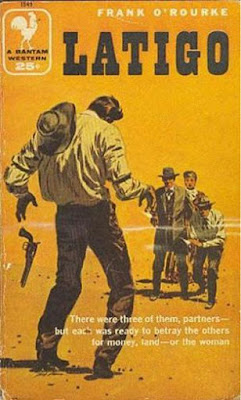 Frank O'Rourke is one of those authors whose books I've seen around forever, but I've never read much by him. Three books, actually, WARBONNET LAW and GUN HAND, a pair of Westerns I thought were okay, and HIGH DIVE, a hardboiled mystery I didn't care for. LATIGO, my third Frank O'Rourke novel, is sort of a cross between those two genres. It takes place in a small town on the Missouri River in Dakota Territory, 1875, and involves three crooks—one local and two outsiders—who are plotting together to stage a phony bank robbery. They're also scheming to double-cross each other the first chance they get. But things go awry, as they always seem to in books like this, and a woman gets involved, and then more complications ensue and nobody can be trusted.

Something seemed very familiar to me as I was reading this book, and after a while I realized what it was. With its complex and unsympathetic but human characters, the melancholy noirish tone that dominates the book, and the lack of the genre's usual trappings, LATIGO reminded me very much of an Ed Gorman Western. O'Rourke's prose doesn't have the elegance of Gorman's, nor are his characters as compelling, but LATIGO is certainly in the same neighborhood. It's not really a likable book, but it's well written and definitely suspenseful. My biggest complaint is the title, which has nothing to do with the book and seems slapped on just to make it sound more like a traditional Western, which it really isn't. It's a good book, though, and worth reading, although I suspect that O'Rourke will never be one of my favorites.

(That's the 1956 Bantam paperback above, the original 1953 Random House hardback below, both scans from the Internet. I own and read the hardback but don't have scanning capability at the moment.) 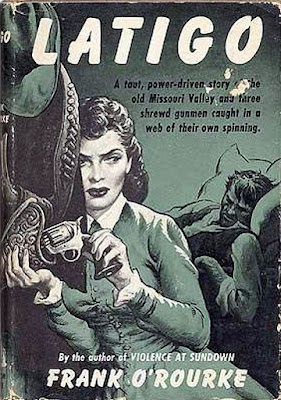 I read a number of Frank O'Rourke westerns about 20 years ago. Good, but not great.

In the same neighborhood as an Ed Gorman western? That interests me. Thanks for reviewing this.

O'Rourke is actually one of my core group of favourite western writers, and I think it's because I read one that grabbed me somehow years ago. Might even have been this one. He's one of those acquired tastes that some love and some, not so much. I've generally enjoyed all of his books that I've read, even though as you mention James, sometimes they're not quite likeable in some way. The Professionals aka Mule for the Marquesa is a good one, made into an enjoyable film too, and also an example of the "caper" type of story that typifies a lot of his books. I like a good off-trail western and O'Rourke is certainly that much of the time.