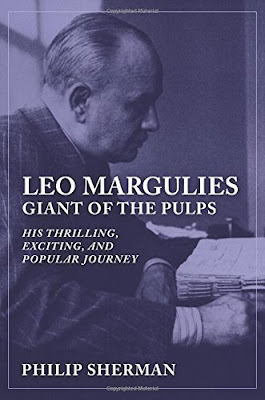 Philip Sherman emailed me several years ago when he was researching a biography of his uncle, the legendary editor and publisher Leo Margulies. I wasn’t able to help him much, but because of that contact I knew this book was in the works.

Now LEO MARGULIES: GIANT OF THE PULPS is out from Altus Press, and it’s a wonderful volume for fans of the pulps, digest magazines, vintage paperbacks, and basically anybody who has an interest in popular fiction of the Twentieth Century. Leo Margulies had a hand in just about all of those areas.

There’s plenty of information in this book about the various publishing enterprises Margulies was involved in, and while I already knew some of it, there’s a lot of background I wasn’t aware of. The sections about Margulies’ early days in the business were mostly new to me, as well.

But since Margulies was Sherman’s uncle, this volume provides an excellent portrait of Margulies the man without glossing over his flaws, although to be honest there don’t seem to have been very many of those, most notably a temper that could be explosive at times. But in addition to his skills as an editor and publisher, Margulies seems to have genuinely liked writers and been close friends with many of them. Sherman also devotes some space to Cylvia Kleinman, Margulies’ wife, who worked in various editorial capacities on many of his publications.

Now, as for my personal connection with all this (because what writer can resist talking about himself and his work), I broke in at MIKE SHAYNE MYSTERY MAGAZINE, the longest running and most successful of Margulies’ digest magazines, about a year after he passed away, so I never had any dealings with him. But several years before that, while I was still in college, I submitted a story to MSMM, the first time I’d ever sent a story to a magazine. It came right back with a rejection slip, of course, but Cylvia, who was the editorial director of the magazine at that time, wrote a personal note on it thanking me for the submission and asking me to send them something else. It was quite a while before I did, and by that time Sam Merwin Jr. had become the editor, so I got my rejections from him. And finally acceptances, too, for which Cylvia signed the checks. I’ve always been glad that my first story was accepted by a genuine pulp editor and paid for by another pulp editor. I can’t help but wish that I had gotten to know Leo Margulies as well.

But I’ve digressed. LEO MARGULIES: GIANT OF THE PULPS is one of the best books on the pulp and digest era that I’ve read, and I give it my highest recommendation. I really enjoyed reading it.

I had heard of this one. Definitely on my list.

I might've been who pointed Sherman toward you, among some others.

Thanks for the memoir!

I never sold anything to Mike Shayne's Mystery Magazine, but when I was in my early teens I submitted several stories to it. Cylvia Kleinman was the editor then, and I'm sure that, because I'd told her my age in the cover letter accompanying my first submission, she always included a personal note telling me why she rejected a story. I'm sorry I was never able to write anything salable at that time, but I always appreciated that she took the time to encourage me with those personal notes.