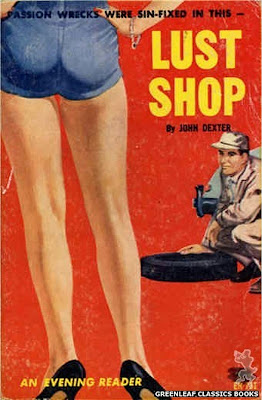 (This post originally appeared in somewhat different form on September 15, 2009.)

LUST SHOP is narrated by Pete Ritchie, who lives in a suburb of Los Angeles and owns a garage specializing in repairing foreign cars. Pete is a young, virile guy, of course, who enjoys romancing the rich, beautiful married women who bring in their foreign sports cars for him to work on, hence the title. To his surprise, Pete gets really hung up on one of his customers, a gorgeous blonde named Chris. She won’t have anything to do with him, though, until he agrees to handle a little problem for her. It seems that she’s being blackmailed . . .

Well, you know as well as I do that this is a set-up for a Gold Medal novel. However, since this isn’t a Gold Medal novel but rather an Evening Reader, Pete doesn’t jump right away at the chance to get involved in Chris’s troubles. Instead he tries to distract himself by bedding various other women in a series of scenes that seem like nothing more than padding at first. In a nice twist, though, later on they actually turn out to be connected to the main plot. When Pete finally does decide to try to get the blackmailer off of Chris’s back, you know things won’t turn out the way he wants them to. They’re just going to get worse. Again, this isn’t a Gold Medal, so even though you’d have to call it a hardboiled crime novel, the plot doesn’t play out exactly like you might expect if it was written by Charles Williams or Gil Brewer.

The thing about books published under the “John Dexter” house-name is that you never know what you’re going to get. I’m reasonably certain that this book isn’t by Robert Silverberg, Lawrence Block, or Donald E. Westlake. All the Harry Whittington novels published under the John Dexter name have been identified, and anyway, LUST SHOP doesn’t read anything like Whittington’s work. The breezy, wise-cracking style reminds me a little of the Clyde Allison books by William Knoles, but this doesn’t seem like a Knoles plot to me. Which means the actual author is probably one of the half-dozen or so other writers who turned out books for William Hamling’s sleaze publishing empire. I have no real idea which one it might have been.

LUST SHOP certainly isn’t some sort of lost classic, but it is a fast-paced, fairly entertaining yarn with a couple of decent plot twists and the occasional nice line. If you like this sort of book – and obviously I do – it’s worth reading if you come across a copy. I recently picked up a nice stack of coverless John Dexter books (including a couple of Whittingtons), so you can expect to be reading about more of them here on the blog.

(Yeah, well, I'm still working on that . . . There was no cover scan in the original version of this post because my copy is coverless and I couldn't find one on-line back in '09. But the one above comes from the great Vintage Greenleaf Classics website, which you have to check out if you have any interest in these books at all.)
Posted by James Reasoner at 5:00 AM

I know the following POSTMAN RINGS'ish storyline is so familiar a plot as to be cliche these days (and probably in its own era) -- ". . . owns a garage specializing in repairing foreign cars. . . . Pete gets really hung up on one of his customers, a gorgeous blonde named Chris. She won’t have anything to do with him, though, until he agrees to handle a little problem for her. It seems that she’s being blackmailed . . ." -- and there're hundreds of variations on this same plot out there among the vintage pbos, but I swear I'd prefer to read a decent one of those than just about any of the slick commercial crime novels these days (e.g. Michael Connelly, Dennis Lehane, Harlen Coben, et al). There's an immediacy to -- and an intimate familiarity with -- the Everyman character of the pbo, and vintage relationships between conniving characters that are at once almost charming in their sepia simplicity but are also timelessly compelling in their driving, base motivations.

James, I keep waiting for a followup to DUST DEVILS and TRACTOR GIRL, two of the better modern interpretations of the vintage pbo formula that I've read. It's been a while since the aforementioned two...anything similar to them on the horizon?

I've outlined another crime novel set in post-World War II Texas that's loosely based on some actual events (very loosely), and I'm still planning on writing it "one of these days". But when or if that will come about, I just don't know. I haven't given up on it.