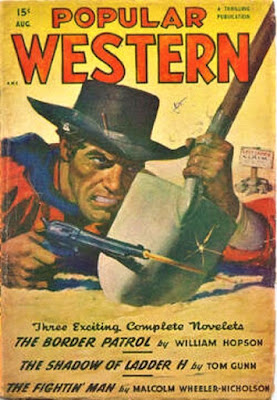 I think that's the first time I've seen anybody use a shovel for cover during a gunfight. Doesn't seem to be like it would be all that effective, although it seems to be doing the job in this cover by Sam Cherry. This issue of POPULAR WESTERN has a strong group of authors inside, including William Hopson, Malcolm Wheeler-Nicholson, Louis L'Amour, Tom Gunn (probably Syl MacDowell), Ben Frank, Harold F. Cruickshank, Alfred L. Garry, and house-name Jackson Cole. I'm not that fond of some of those writers, but their work was popular and they sold plenty of it.
Posted by James Reasoner at 6:00 AM

Max Brand and Louie L’Amour were among the first Western writers I read. I devoured L’Amour’s works but unlike many other writers, I never had much of a desire to revisit (though I have read some of his earliest pulp works more recently). Kind of like Robert Parker’s Spenser works, loved them at the time but no thoughts of rereading.

L'Amour's pulp stories are his best work as far as I'm concerned. I've reread a couple of his novels and thought they held up well, but I probably won't reread any more. Too many books out there I haven't read yet. Generally I don't reread books, but I've loosened that rule in recent years in order to revisit some old favorites. I intend to continue doing that.

I think that the best novel of L'Amour is "Hondo", a novelization indeed, based on the script by James Edward Grant for the homonymous film starring John Wayne (1953), that in turn was based on L'Amour Collier's short story "The Gift of Cochise" (1952).
Grant, a personal friend of the "Duke", improved the story in several different ways. First of all the name (in the story it was Ches Lane), than the background of Hondo (married to an Apache woman, he lived with the tribe), the presence of the dog (played by Lassie) who incarnate Hondo self confidence and lack of need for others, and the representation of Angie's gusband as a brute who will be killed by Hondo.
I think that, for instance, L'amour created for the novel the part regarding the massacre of the Cavalry Patrol, that in the movie is liquidated with a couple of sequences only. In anycase the novel it's truly a masterpiece in the genre.
Tiziano Agnelli

I like the novel HONDO and agree that Grant's screenplay improves on the original story. My favorite L'Amour novel is TO TAME A LAND, with FLINT a close second. I also like THE DAYBREAKERS and HIGH LONESOME.

About the shovel,James. I always thought the entrenching tool, ie a folding shovel, was one of the most efficient items of military hardware. I don't see why a shovel couldn't deflect bullets. 😃