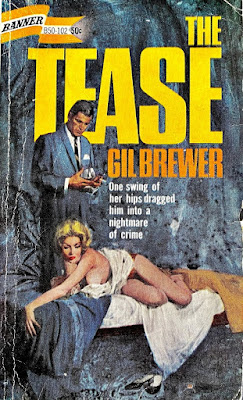 Things aren’t going too well for Wes McCord, the narrator/protagonist of Gil Brewer’s 1967 novel THE TEASE. Wes has a beachfront house in Florida that he inherited, but other than that, he’s almost broke, his career as a real estate salesman is going nowhere, he drinks too much, he’s a philanderer, and after the argument that opens this book, his wife has left him. So, filled with anger, despair, and booze, Wes wanders down to the beach . . . and who happens to come running along?


Why, a beautiful, redheaded, and very naked teenage girl who has some bad guys after her, of course. And did I mention that she happens to know the location of $300,000 that’s up for grabs? 300 grand that, in Wes’s mind, would solve all of his problems? Is he going to help the girl and try to get his hands on some of that dough? What do you think?

Of course, there’s also a murder mixed up in the whole deal, and the cops quickly suspect Wes of being involved, and those guys who are after the girl are really bad news, and the sexy redhead may or may not be trustworthy . . .

This is the next-to-last noir thriller Brewer published in his lifetime, and man, it’s a late-career masterpiece. Brewer’s prose is stripped down so that there’s not an ounce of fat on it, the story is paced like a rocket, taking place in approximately 24 hours, and the whole thing is so effective it almost leaves the reader breathless. I’ve always thought of Brewer as a plot and pace guy, not a prose stylist, but there are some very nice turns of phrase in this one, too.

It’s a shame that Brewer’s career went downhill after this, but he left us some really fine books and THE TEASE is one of them. It’s been reprinted by Stark House in a double volume with SIN FOR ME (which I also read and enjoyed a lot, although it doesn’t rise to the level of THE TEASE). If you’re a Brewer fan and haven’t read these, you really need to grab this reprint edition. Highly recommended.

I've got that one in ebook. I'll have to move it up in the queue.