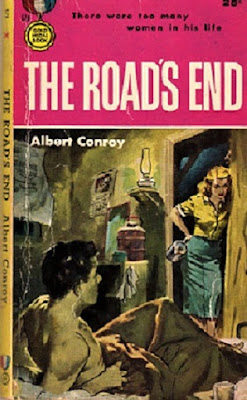 During the Fifties and early Sixties, Marvin H. Albert was a prolific and dependable author for Gold Medal, turning out Westerns, hardboiled novels, and even movie novelizations of movies you wouldn't have thought would have novelizations, let alone from Gold Medal (THAT JANE FROM MAINE, starring Doris Day, Jack Lemmon, and Ernie Kovacs, for example). He wrote under his own name and the pseudonyms Albert Conroy (sometimes Al Conroy) and Nick Quarry.

THE ROAD'S END (1952) is a hardboiled yarn under the Albert Conroy name, and it's a good one. Albert uses the old amnesia plot in this one but throws a clever twist on it. The narrator/protagonist doesn't know who he is when the book opens, but he finds out pretty quickly. He's Dan Ginger, a bar owner in a small Gulf Coast town, married to the daughter of the local rich man but carrying on affairs with numerous other women, including one who turns up murdered on the same night Dan was clobbered on the head and dropped off a bridge, seemingly to his death. He survives, but he's the leading suspect in his girlfriend's murder, and before you know it, somebody else has been killed, and Dan's caught between the wife he decides he loves after all, the beautiful country girl whose father fished him out of the river, his partner in the bar who maybe hates him, a doggedly determined sheriff, and some mobsters who want to move in with their gambling operation.

Those of us who are Gold Medal fans have seen all these elements before, but Albert weaves them together expertly with some fine writing and characters. THE ROAD'S END almost belongs in the upper level of Gold Medals. I liked it a lot, except for the ending, which made me go "Wait. What?" I almost wanted to see if some pages were missing from my copy, a later printing from 1958. (That's it in the scan.) I decided that, no, that's the way Albert intended to do it, but I don't agree with him.

That said, THE ROAD'S END is still well worth reading. Albert does a great job with the small town setting and the book has some really nice lines in it, as well as some excellent action scenes. I really need to read more by him.

UPDATE: I've discovered that this is actually Albert's first novel.

This was one of the first GM paperbacks that I read. (Many moons ago) It hooked me in to all of Marvin Albert's novels which resulted in me to go on a crusade to collect all of his paperbacks & HCs.

His Westerns are exceptional along with his four adventure novels written in the 70s under the name of Ian MacAlister.

I have not read this one but Marvin Albert hs given me many hour of entertainment, especially liked the Peter Sawyer series and the adventure novels as by Ian MacAlister. Time I reread the Sawyer books.

I also tip my hat to his westerns and the Tony Rome series.

I have one of his Westerns, THE BOUNTY KILLER, sitting on top of the stack of paperbacks next to my computer. I need to check my shelves and see what else I have by him.

That's a really informative site. Thanks for the link. I didn't realize that THE ROAD'S END was Albert's first novel or I would have mentioned that in the post. I should update it.