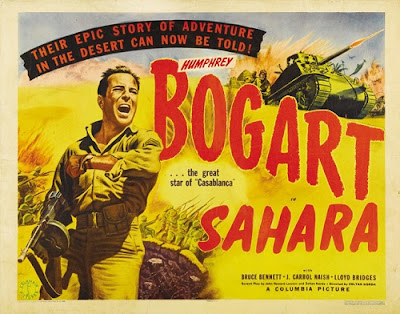 I had seen this movie before, so it wasn’t completely overlooked by me, but the last time I watched it was during the summer of 1966, so I remembered almost nothing about it except that I liked it at the time. Felt like watching it again now, and I’m glad I did because it’s even better than I remembered it.

The plot of SAHARA is pretty simple: an American tank commanded by Sgt. Joe Gunn (Humphrey Bogart) and crewed by radioman Jimmy Doyle (Dan Duryea) and gunner Waco Hoyt (Bruce Bennett) is trying to get through the North African desert and link back up with the rest of their command before the Germans catch them. In order to do that, they’ll have to have more water, so they head for an area where some wells are supposed to be located. Along the way, they pick up a British medic, some British soldiers, a Frenchman, a Sudanese soldier with an Italian prisoner, and a German pilot who tries to shoot up the tank only to have his plane shot out from under him. It’s a motley crew, certainly. Then, when they finally find water, they have to defend the well from a horde of German soldiers, basically sacrificing their lives to slow down Rommel’s advance.

This movie has a great cast. In addition to the actors mentioned above, we have J. Carrol Naish as the Italian prisoner, Lloyd Bridges as one of the English soldiers (his British accent isn’t bad), Richard Aherne as the medic, Kurt Kreuger as the German pilot, and a fine performance from Rex Ingram as the Sudanese sergeant. The acting is strong all around.

Director Zoltan Korda co-wrote the screenplay, based on a story by Philip MacDonald (probably best remembered these days for his mystery novels). Korda keeps the action moving along very smoothly, and the movie generates a lot of suspense leading up to a very effective, almost last minute plot twist. There’s some humor and tragedy along the way, and the whole thing works as great entertainment. I never hear much about this movie, but as far as I’m concerned it’s a real gem. Highly recommended.

James, I believe the Philip Macdonald story was PATROL (1927), earlier filmed as THE LOST PATROL by John Ford. In the novel and earlier movie, the setting was WWI Iraq, then Turkish Mesopotamia, and the British patrol was picked off one by one by Arab snipers whom they (and the reader) never see. I've read that the story was also turned into a Western.

The picture of Bogart with the tommy gun was reused for the cover of Blackhawk Comics #19, cover dated June 1948

Fred,
The Western remake is LAST OF THE COMANCHES, from 1953, starring Broderick Crawford and Barbara Hale (Della Street her ownself).

I first saw this movie about 10 years ago and really enjoyed it.

My thought was it was similar to Alfred Hitchcock's "Lifeboat" because it showed a group of very different people who had to work together to deal with an arrogant Nazi 'superman' type.