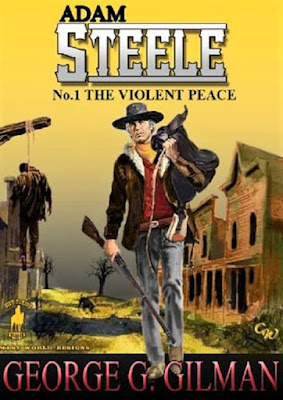 Over the years I’ve had a bit of a love/hate relationship with the work of British Western writer George G. Gilman, who was really a prolific paperbacker named Terry Harknett. I’ve read more than two dozen entries in his most successful series, Edge, and while I really enjoy the plotting and pacing, and I’m even fond of the groan-inducing puns the series is known for, I don’t like the graphic violence and the vicious amorality of the books. Even so, I find myself drawn to read one now and then. 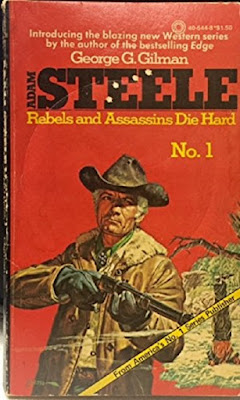 Harknett’s second most successful series features a former Confederate cavalryman named Adam Steele. Steele and Edge even met in several crossover volumes. Both series were reprinted in the U.S. by Pinnacle, often with title changes. The first Steele book, THE VIOLENT PEACE, was published by Pinnacle as REBELS AND ASSASSINS DIE HARD. I believed I had read that one many years ago but never continued with the series. Recently, thinking that I might give the Steele books another try, I decided to reread it, only this time around it would be the e-book version, under the original title THE VIOLENT PEACE.

Well, I discovered that I must have started but never finished it, because I have no memory of it beyond the first few chapters, which occur on the night Abraham Lincoln is shot at Ford’s Theater. The Civil War is over, and Adam Steele is supposed to meet his estranged father at a tavern in Washington D.C. so they can mend the rift between them. Unfortunately, in the uproar over Lincoln’s assassination, the elder Steele is lynched by a group of men who claim that he was part of the conspiracy to kill the president. Adam Steele arrives too late to save his father, but he immediately sets out to track down and kill the men responsible for the lynching. 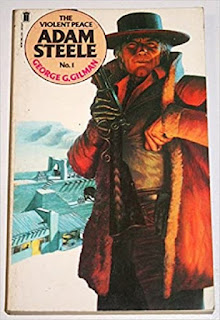 All that, I remember. But I don’t think I read beyond that point, because Steele follows the murderers to Tennessee and finds himself mixed up in such a bizarre, over-the-top situation that I feel certain I would have recalled if I ever read it. In the last section of the book, Steele finds himself facing enemies the likes of which I don’t think I’ve ever encountered before in a Western.

Of course, THE VIOLENT PEACE isn’t much of a Western, taking place as it does in Washington D.C., Virginia, and Tennessee. I may have found that off-putting enough that I never continued with the series all those years ago. The violence is just as graphic and disturbing as in the Edge books, and I found Adam Steele to be an even less sympathetic protagonist than Edge. However, I did enjoy Harknett’s plotting in this one, and I like the fast-paced style of his writing. I’m not a big fan of origin stories to start with, and that’s definitely what THE VIOLENT PEACE is. From the looks of them, the other books in the series are more traditional Westerns. I found enough to like in this book, and in the Edge books I’ve read, that I’m going to read at least the second book in the Adam Steele series, and then we’ll see how things go from there.
Posted by James Reasoner at 6:00 AM

I am exactly where you were, started Adam Steele and did not finish first Chapter. However, Edge is a guilty pleasure. I have read nearly the entire series over the years. Yes, the violence is over the top but maybe so over the top it isn’t as troubling to me as I would have expected. A dog coming out during a gun battle and starting to eat a decapitated head (for instance) prompting one of the endless Edge jokes is a bit much to get troubled by.

Harknett’s early Edge novels have some very odd features. One had all the supporting characters named after Western movie actors. jack Elam dies horribly, Edge spares Audie Murphy. Another had Rollo Stone, popular musician, kidnapped at a violent music festival. The Christmas novel is just way too much, down to the ending in a ghost mining town named Bethlehem.

series actually calms down in the later novels. Less weirdness, less violence and an almost sympathetic Edge. But still the puns, many puns.

As much as I wanted to like the Edge and Steele books I just couldn’t get there. And I tried.
The idea of, not one but two, extended series of hardboiled, spaghetti-western inspired historical action novels hits me right where I live.
In concept this is wonderful, in execution I just can’t take it.

The violence isn’t quite a deal-breaker. At times it comes across strangely like pornography-- a scene is described, then described some more, and then some more with added detail.
So if you’ve opened the book looking for exactly that, you’re happy. If not, then it seems kind of excessive and unnecessary.

It’s the puns and jokey tone that stop me. Every single hardboiled moment is torpedoed by the author peeking around his badass hero and winking at me, “Get it? Do ya get it? Haw!”
For me this completely cuts the legs out from under these books. I honestly envy anyone who likes this stuff and has such a huge trove of reading to enjoy, but it’s not for me.

I've heard good things about the later Edge books and want to get to them, but I tend to read series in order and considering that I started reading Edge almost 40 years and haven't made it halfway yet leaves me thinking I may have to skip some if I ever do.

I liked some of these when I was a kid, because they were so different from the more saccharine Louis L'Amour. But I feel the same way John does about them now. I looked at one a few years ago and didn't like it. Not only are the puns tedious and the violence cartoony, there is just too much downright cruelness in these books, as if Hartnett celebrated it. Hardly ever any heart whatsoever. Like the Casca series by Barry Sadler, I prefer the overall concept over the execution.

I've been skipping around in the Edge series and just finished #37 where I found Edge to be a far more appealing and sympathetic character than in the early books. I think I'm going to prioritize the later books in my Edge reading queue now.

Well have to say the Edge series is still my most liked of the western based series. Though there were a few of them would never read again. Though Adam Steele is also has its good parts on its own. But Doc Savage will always be my most favored series. Doc Icenogle