Overlooked Movies: They Got Me Covered (1943) 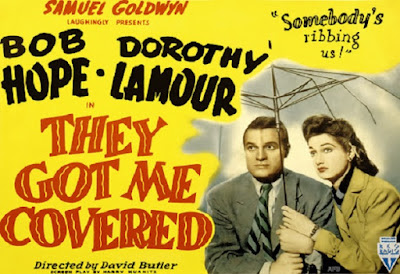 THEY GOT ME COVERED is another early Bob Hope movie that I somehow never saw until now. It’s got a great premise: Hope is an inept newspaper correspondent, Dorothy L’amour is his girl Friday/girlfriend who shares an apartment with five other young women in war-crowded Washington D.C., and together they uncover a Nazi spy ring run by Otto Preminger, Eduardo Ciannelli, and Philip Ahn. Hope and L’Amour have the Nazis after them while they run around trying to get the proof they need to expose the spy ring. Many hijinks ensue.

This is an odd movie that relies more on funny situations and physical comedy for its laughs rather than the snappy banter that Hope was known for. There’s some of that in Harry Kurnitz’s script, of course, but overall it’s not as funny as many of Hope’s movies. It is, however, a fairly complex, well-plotted little spy thriller, and as usual, for all of his cowardly posturing, Hope’s character turns out to be quite a scrapper when he’s forced into it.

For the most part, the cast carries this movie. I always like Hope, Dorothy L’amour is beautiful and funny, all the bad guys are suitably sinister, and character actor Donald Meek does a weird scene in which he’s a crazy old man who thinks the Civil War is still going on. It’s amusing, but it almost seems like a scene from a different movie. There’s a Bing Crosby joke (always welcome). THEY GOT ME COVERED never quite rises above the level of average . . . but an average Bob Hope movie from that era is still pretty entertaining. I’m glad I finally got around to watching it.