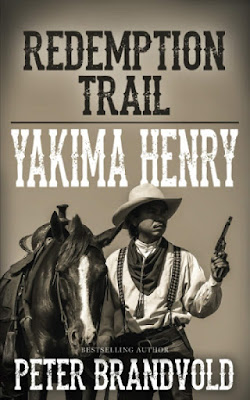 REDEMPTION TRAIL is the latest Yakima Henry novel from Peter Brandvold, and it’s a mighty good one. Yakima, a big, two-fisted, gun-handy, half-breed drifter and adventurer, is traveling with a partner for a change when disaster befalls them. The old-timer named Pete Cahill winds up dead, but before passing on, he gets Yakima’s promise to deliver a letter and a money belt to his son, far north in Dakota Territory. Yakima sets out to honor that pledge, but it’ll come as no surprise to the readers that he runs into a heap of trouble along the way, starting with an encounter in Denver with some visiting Englishmen that makes him some enemies.

Then there are the two orphaned girls he takes under his wing, one of them beautiful and just old enough to be tempting to a man of lesser moral fortitude than our boy Yakima. Plus the passel of vicious bounty hunters who are after him and willing to kill anybody who gets in their way. With all that and more going on, Yakima will be lucky to reach his destination with his hide intact, let alone complete his mission.

As always with a Brandvold book, REDEMPTION TRAIL delivers plenty of gritty action, colorful characters, and vividly captured settings. Brandvold writes with the soul of a poet and the heart of a pulpster. Yakima Henry may well be my favorite character of his. There are a few places in this book where it seems like ol’ Yakima may be mellowing a mite, but he’s still capable of dealing out a lot of hot lead to the bad guys. If you’re a Brandvold fan, chances are you already have this novel. If you’re not and you love Western action, check it out. It’s one of the best books I’ve read this year.

Posted by James Reasoner at 5:14 AM