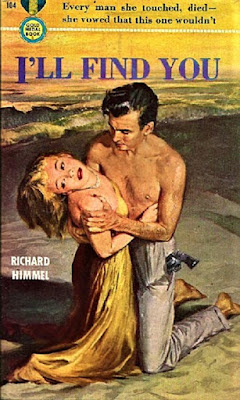 I’LL FIND YOU by Richard Himmel was one of the earliest Gold Medal novels and also one of the most successful, going through several reprintings after it was published originally in 1950. It’s the first of a series featuring Chicago lawyer Johnny Maguire, although I’m not sure Himmel (also a very successful interior decorator) had any plans to make Maguire a continuing character when he wrote this book.

Maguire is an interesting character, a scuffler and a scrounger, a low-rent type who has ambition to be something more, a womanizer and kind of a heel. But then he falls in love with the widow of a rich client, only to have her commit suicide by walking into Lake Michigan with a fortune in cash.

Ah, but you’ve read Gold Medal novels before. Johnny doesn’t believe she’s actually dead. He thinks she staged the suicide for some reason unknown to him, but he’s determined to find her and discover the truth.

Well, it’s no surprise that he does, and fairly quickly, too, and the whole thing plunges him into a conflict between two mobsters (one of them another of his clients), some romance, and a murder which everybody, cops and crooks alike, assumes Johnny committed. Can he get out of this mess and win the girl? That’s what the rest of the book is for, isn’t it?

I’d never read anything by Himmel before. He has a really appealing style in this book, fast-paced, funny, almost breezy at times, with lots of excellent dialogue, but he also manages to work in some poetic bits from time to time and some angst and tragedy. I’m not sure I’ve read anything exactly like it before, and I can see why I’LL FIND YOU was a big success. It really had me flipping the pages to find out what was going to happen.

This book, along with the other four Johnny Maguire novels and all the stand-alone novels by Himmel, has been reprinted by Lee Goldberg’s Cutting Edge Books. You can even get the complete collection for a very reasonable price. I really enjoyed I’LL FIND YOU and plan on reading the other books by Richard Himmel.

I enjoyed your review. I'll Find You and the other novels are available through Kindle Unlimited. I downloaded it and have already started reading it.