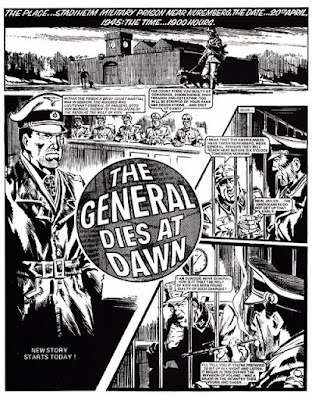 Like DEATH SQUAD, which I read recently and really enjoyed, THE GENERAL DIES AT DAWN is a serial from the British comic BATTLE, written by Alan Hebden with art by John Cooper. And also like DEATH SQUAD, it’s written from the German point of view, although there’s only one protagonist in this story, not the five of DEATH SQUAD.

That protagonist is the general of the title, Otto von Margen, a Panzer commander fighting on the Eastern Front in Russia. As the story opens, von Margen is imprisoned, convicted of treason and cowardice and awaiting execution by the SS at dawn the next day. But it’s the spring of 1945, and American troops are closing in on the prison where von Margen is being held. If they get there first and take control, von Margen probably will be spared. If not . . . he’ll keep his date with the SS firing squad.

So to pass the time on what may be his last night, von Margen tells the story of his military career to the soldier guarding him, with each part of the tale being another episode in the serial. Von Margen, a proud officer from the Junker class, has clashed repeatedly with the SS during the war, such friction eventually leading to his imprisonment and conviction. But along the way, he takes part in many battles, including the desperate Siege of Stalingrad.

This story is shorter but more epic in scale than DEATH SQUAD, which covered a relatively short period of time rather than most of the war. But there’s plenty of action, mostly tank battles on the frozen Russian plains. Von Margen is an interesting character, a professional soldier who fights because that’s his job, another example of a German protagonist the reader can sort of root for, even though he’s on the wrong side in the war. 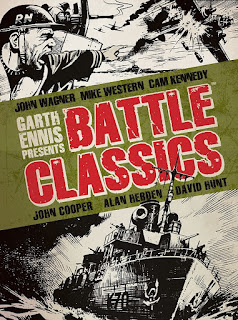 Hebden’s script has the usual twists. He can pack an awful lot of plot into these three-page episodes. Cooper’s art is excellent as well. All of it comes together to create a considerable amount of genuine suspense as the story winds down and we flip the pages to find out whether the Americans will arrive in time to save von Margen’s life. Do we even want them to? That’s a question every reader will have to answer for themselves, I suppose. This story was reprinted in the collection BATTLE CLASSICS, edited by Garth Ennis, which is still available, and if the others in that volume are as good, it’s well worth reading.