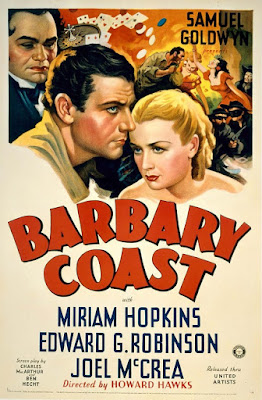 I was looking around for old movies to watch and came across a mention of BARBARY COAST, released in 1935. A movie directed by Howard Hawks, with an original script by Ben Hecht and Charles MacArthur, and I’d never seen it? That really surprised me, so we watched this one a few nights ago and I enjoyed it quite a bit.

It’s the story of a young woman (Miriam Hopkins) from New York who travels to San Francisco during the Gold Rush to marry a miner who’s struck it rich. But when she gets there, she discovers that her intended husband is dead, having lost his mine to crooked saloon owner Edward G. Robinson and then been killed in a shootout. With nowhere else to go, Hopkins, who is greedy and ambitious and was only marrying the miner for his money, stays in San Francisco and winds up as Robinson’s mistress while also running the roulette wheel in his casino. But then things get complicated when she meets stalwart young prospector Joel McCrea, and the vigilantes rise up to start dealing out justice to the crooks who think they run the town.

BARBARY COAST is a pretty hardboiled crime yarn in some respects (one reviewer called it LITTLE CAESAR OUT WEST) and also delivers some romance and adventure and a little comedy here and there, mostly from Walter Brennan, still relatively young but already enthusiastically chewing the scenery as an eccentric, cackling old coot, this time an eyepatch-wearing character known as Old Atrocity. With Hecht and MacArthur handling the writing, you know there’s going to be a lot of witty banter and a little sentimentality, and the script comes through with just about everything you’d expect except a satisfying ending.

The cast is really strong in this movie, too. I’m not a big fan of Robinson or Hopkins, but they’re okay and I always like Joel McCrea no matter what movie he’s in. Brian Donlevy is Robinson’s gunslinging henchman Knuckles Jacoby. Harry Carey is a stern and determined vigilante. Donald Meek plays a prospector instead of a traveling salesman or bank clerk for a change. Bob Kortman is a henchman. (Was Bob Kortman ever not a henchman?) David Niven, in his first movie, is a drunken sailor. Supposedly he’s hard to spot, but I saw him right away. Famous athlete Jim Thorpe plays an Indian (typecasting), but I never spotted him even though I looked for him.

Legend has it that Hopkins was such a huge bitch during the filming that when Robinson was supposed to slap her during one scene and accidentally (?) knocked her down, the set erupted in cheers and applause. Don’t know if that’s true or not, but she’s certainly not playing a very likable character for most of the movie.

The personal themes that crop up again and again in Hawks’ work—competence, self-reliance, a desire for independence tempered by the relationships within a group, a beautiful, wise-cracking gal who’s as tough as the boys (mostly)—aren’t really present in BARBARY COAST. It comes across more as a job of work for Hawks, but it’s a professional, well-made, entertaining job of work. Not a great movie, but a very good one most of the time and well worth watching.

Bette Davis had a lot of negative things to say about Miriam Hopkins too, so we can probably say where there's smoke... .

I've not heard of this movie, but I'm going to have to track it down.