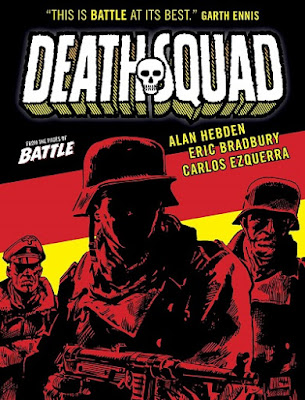 Having grown up reading OUR ARMY AT WAR (with Sgt. Rock), OUR FIGHTING FORCES (with Gunner and Sarge—and Pooch!), and all the other DC war comics, plus SGT. FURY AND HIS HOWLING COMMANDOS over at Marvel, plus being a huge fan of the TV series COMBAT!, I had a hard time warming up to the sub-genre of war fiction that features German protagonists. Oh, I read ALL QUIET ON THE WESTERN FRONT by Erich Maria Remarque and was impressed by it, but it took the ENEMY ACE series by Robert Kanigher and Joe Kubert to convince me that good, compelling war stories could be told from the enemy point of view. Still, I haven’t read much in that field. I have novels by Sven Hassel, Charles Whiting (writing as Leo Kessler) and Kenneth Bulmer (writing as Bruno Krauss) that feature German protagonists, but I haven’t gotten around to them yet.

But then along comes DEATH SQUAD, a magnificent collection of a serial written by Alan Hebden, with art by Eric Bradbury, that originally appeared in the British comic book BATTLE ACTION in 1980 and ’81, and just like that, I’m a big fan. This is one of the best war comics I’ve ever read.

The Death Squad is part of a punishment battalion in the German Wehrmacht and consists of five men: Granddad, the crusty old non-com who’s also a veteran of the first World War; con man Gus; knife expert Frankie; Swede, a Scandinavian lumberjack who’s deadly with a throwing axe; and Licker, the only real Nazi in the bunch, stiff-necked and pompous, as you’d expect. They’re grunts, with the exception of Licker, and as such they’re fighting more for each other and to stay alive, rather than for the Fuhrer or the Fatherland. This seems to be a common concept in the sub-genre. The protagonists are either enlisted men or occasionally an aristocratic officer, but none of them are actually Nazis, and none of them get along with the Gestapo or the S.S. This allows the reader to sympathize with them, at least to a certain extent.

It’s impossible not to sympathize with the Death Squad, as they get thrown into mission after mission where the odds of their survival are almost nil. They’re fighting on the Eastern Front against Russia (which admittedly helps in making the reader root for them) and have to deal with the terrible extremes of a Russian winter, to boot. They infiltrate Moscow to destroy a tank factory, get stranded on a snowed-in troop train under attack by Russian partisans, are tortured by sadistic prison commandants, encounter a beautiful female Russian freedom fighter, and engage in a deadly game of masquerade and deception. Even when they’re transferred back to France, to what seems like an easy job guarding a U-Boat post, they immediately run into trouble from British commandos raiding the place.

Hebden’s script is great, especially in the extended Russian front sequence where he throws in plot twist after plot twist and makes them all work. Characterization is, of necessity, rather limited except for the Death Squad, but each of them comes alive vividly. The tough but likable old-timer Granddad is my favorite, but they’re all portrayed very well. The art by Eric Bradbury is also top-notch, filled with action and details, capturing both the carnage and the poignant moments of war. If you’re a fan of war comics, or war fiction in general, I give DEATH SQUAD a very high recommendation. It’s one of the best books I’ve read this year.

Did NOT know about this one! Thank you, sir!

I think you'll enjoy it, Chuck.

EC had the best war comics with Frontline Combat and Two Fisted Tales but there have been some others like Vietnam Journal by Lomax, several collections with the reputation of being the best Vietnam war comics. Also Charley's War, three big collections that are the best comics about World War One.

Death Squad sounds great. I just ordered it from amazon.

Death Squad was published in the UK under the "Treasury of British Comics" (TBC) imprint - I'll second Walker Martin's recommendation of Charley's War by TBC as well, along with Invasion 1984, and I can also highly recommend the upcoming in 2021 collections of Major Eazy and Hellman of Hammer Force from TBC too. These stories are all from Battle-Action weekly. Two other great stories from Battle Action, Johnny Red and Darkie's Mob were published by Titan Books.

I have all the Johnny Red collections, I think, just need to find the time to read them. They're very impressive looking books. I saw something about Hellman of Hammer Force and thought, "That's another one I need to read!"