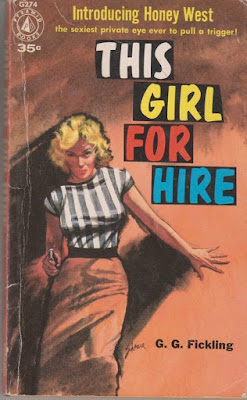 Many, many years ago, when it was new, I watched and enjoyed some of the episodes of the TV series HONEY WEST. Even as a young lad, I appreciated how beautiful Anne Francis was. It wasn't regular viewing for us, however, because it was on opposite GOMER PYLE, U.S.M.C., and my mother really enjoyed ol' Gomer's antics. (To be completely honest, I like Gomer, too.) These days, I own the entire HONEY WEST series on DVD but have never gotten around to watching it. Soon, maybe.

Also over the years I've owned copies of some of the novels in the series that was the source material for the TV show. I may have read one back in the Seventies. I don't recall for sure about that. But recently, I read the very first one, THIS GIRL FOR HIRE, published by Pyramid Books in 1957.

Honey West is the daughter of Los Angeles private eye Hank West. She took over his agency when he was murdered, a crime that remains unsolved as this book opens. However, THIS GIRL FOR HIRE isn't the story of Honey tracking down her dad's killer, as you might expect. Instead, in a very Spillane-like opening, Honey and her cop friend, Lt. Mark Storm, are looking at the body of a murdered actor Honey was fond of. A short time later, Honey is hired by a TV executive who believes the star of the show he produces is trying to kill him. As Honey investigates, she discovers that almost everybody connected with the show has a motive to murder one or more of the other people involved. And that's what happens when they all go on location to shoot some scenes on the island of Catalina. Bodies start dropping all over the place. And wouldn't you know it, there may even be a connection to that murdered actor from the first scene of the book.

Okay, calling this a classic private eye novel may be stretching it a mite. The plot is so overly complicated that it's just too busy and frantic, rather than complex. The big twist ending is entirely predictable. The characterization is really shallow. And despite the claim on the cover, there's very little sex and it's extremely tame. Honey loses some clothes a couple of times. That's about it.

And yet, despite all that, I enjoyed THIS GIRL FOR HIRE. Most of that appeal is probably nostalgic. This is the kind of stuff I would have eaten up back in the Sixties, when I was tearing through any book I could find with a private eye in it. The pace is fast, there are some funny lines here and there, and it's just sexy enough that teenage me would have found it intriguing. It's a Front Porch Book, for sure. I don't know if that's enough to prompt me to read more of the series, but I sure might. This one is available in an e-book edition, as are most of the other Honey West novels.

In my home, we channel-hopped from THE WILD WILD WEST to HONEY WEST to MAN FROM UNCLE over the course of Friday night. I suppose now some meta-fan would devise a family tree purporting that James West was Honey West's great-grandfather.

If I remember, Honey West only lasted one season. For a half hour show, it wasn't that bad. It reminded me of the same production values as the tv show "The Green Hornet". In "Honey West" there were a couple of episodes where Anne Francis appeared in a bikini. But overall it was her partner, Sam Bolt played by John Ericson that was miscast and misused. He came off as being a guard dog and not a partner.

It makes perfect sense to me that James West was Honey West's great-grandfather, although I hadn't thought of it until now.

And you can never go wrong with Anne Francis in a bikini.

Rather than actually produce a pilot, the production company Four-Star, introduced her on a second season episode of BURKE's LAW, "Who Killed the Jackpot?," in which she and Captain Burke compete to solve the same murder. Since, by the third season of BURKE (the same season HONEY WEST ran its sole season), Amos Burke had transitioned from a millionaire cop to a millionaire secret agent, they never had a cross-over episode.

When BURKE'S LAW was revived in the '90's for two seasons, Anne Francis returned to the role in an episode titled "Who Killed Nick Hazard?," only, for copyright reasons I imagine, she was referred to as "Honey Best" rather than "West."

That was a kind of fun episode, with guest star "suspects" from private eye shows of the past, including James Parker (from SIMON & SIMON), Buddy Ebsen (from BARNABY JONES), Tanya Roberts ( from CHARLIE'S ANGELS), AND Edd Byrnes (from 77 SUNSET STRIP).

"Honey, what happened to your clothes?" I forget which book, or it happened more than once (probably), but that's how I'll always think of the Honey West books.

Nobody ever said that to the Continental Op. Although I believe Shell Scott was occasionally wardrobe-challenged, as well.

Does anyone else remember Ann Francis in LOST FLIGHT with Lloyd Bridges? Good movie for its time, early 70s. I think it was made for TV.

In my authorized/licensed Honey West novel, A GIRL AND HER CAT, I did imply a familial relationship between Honey and James West, without specifically naming James West.