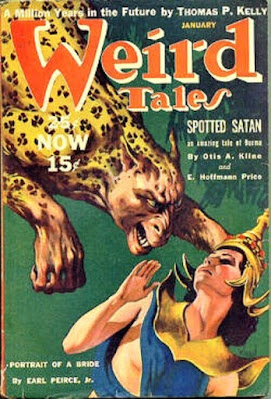 I’ve read and enjoyed plenty of stories by E. Hoffmann Price, but I’ve never read that much by Otis Adelbert Kline. I know I read one sword-and-planet novel by him many, many years ago and recall liking it. However, that’s all I remember about it. I don’t know who wrote what in this collaboration between the two of them, which originally appeared in the January 1940 issue of WEIRD TALES with a fine Virgil Finlay cover. I can tell you, however, that “Spotted Satan” is a highly entertaining novella.

The protagonist is a rugged American hunter named Harrison Steele (a stalwart pulp hero name if there ever was one!), who is hired to kill a leopard that’s terrorizing a teak camp in Burma. When Steele travels there with his trusty Afghan sidekick, he discovers that all the natives believe the leopard is really a supernatural creature that has been sent to punish them for cutting a road through sacred territory. The American manager of the camp isn’t much help and is prone to mysterious disappearances.

Well, you can probably see where this plot is going just as well as I can, but Kline and Price manage to pull off a fairly nice twist at the end. They also provide a suitable amount of action and plenty of local color, along with some good characters and a touch of humor now and then. Achmet, Steele’s Afghan friend, is both comedy relief and plenty tough and competent when circumstances warrant, as the best sidekicks are.

Despite the weird elements, “Spotted Satan” is really more of a good, solid pulp adventure yarn. I thoroughly enjoyed it. I read it in the original pulp, but it’s also available in THE E. HOFFMANN PRICE FANTASY AND SCIENCE FICTION MEGAPACK published by Wildside Press.

The Afghan sidekick sounds like a nod to similar characters in stories by Price's friend and Kline's literary-agent client, Robert E. Howard. Kline's interplanetary and jungle adventures are a little creaky but fast-moving and a lot of fun anyway.

Yes, having just read "The Fire of Asshurbanipal" not that long ago, the relationship between Harrison Steele and Achmet reminded me very much of Steve Clarney and Yar Ali.