Overlooked Movies: Beyond the Mask (2015) 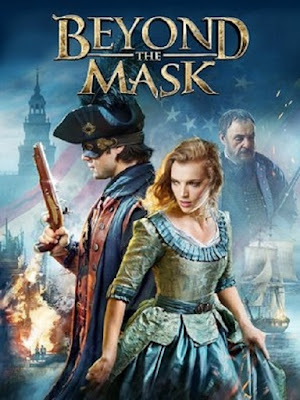 I’d never heard of this movie until someone mentioned it in an email group I belong to that’s devoted to Zorro and the work of pulpster Johnston McCulley, but it sounded promising so I decided to check it out. BEYOND THE MASK is set in England and America in 1775-76. The protagonist is a former mercenary/assassin for the East India Company who wants to leave the violence and darkness of his life behind and start over as a peaceful man. His former bosses don’t want that, however—he knows too much, and he’ll make a good fall guy for them—so they try to have him killed. Some twists of fate wind up with him taking on the identity of a vicar and falling in love with a beautiful young woman. But more plot twists ruin what might have been an idyllic existence for him, and before you know it, he’s off to the rebellious colonies in America, where he becomes a masked vigilante known as the Highwayman, battling plots by his old enemies who are trying to put a stop to the American Revolution before it barely gets underway. From that point, things get pretty wild and over-the-top.
BEYOND THE MASK is part Dr. Syn, part Zorro, and a lot The Wild, Wild West, a steampunkish version of the early days of the Revolutionary War. You won’t have heard of any of the actors in it except John Rhys-Davies, who has a good time chewing the scenery as the head bad guy. But the cast does pretty good for the most part, there’s a lot of well-staged swashbuckling action, and the production values are top-notch most of the time. The movie looks good. Despite some notes at the end trying to justify the goofy plot, there’s not much semblance of historical accuracy, but if you go into it knowing that and take the movie for what it is, I think it’s entertaining.
This was produced for the inspirational market, but the religious elements are pretty rare and not heavy-handed. There’s no sex or cussing or excessive gore, but you don’t find those things in movies from the Thirties and Forties or TV from the Sixties, and that’s what BEYOND THE MASK reminds me of. Judging by the reviews on IMDB, this is a love it or hate it movie, but I didn’t react either of those ways. It’s not a great film, but I had a good time watching it.
Posted by James Reasoner at 6:00 AM