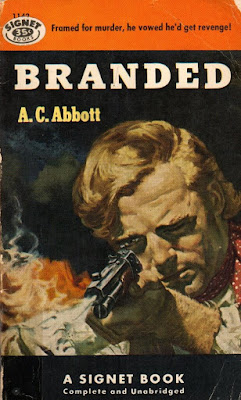 Rock Kendall rides into Arizona with a murder charge from Texas hanging over his head. Even worse, he’s accused of killing a woman, just about the most heinous crime anybody can commit on the frontier. Rock was framed, though, and he’s on the trail of the actual murderer, his former partner in a ranch that the varmint wound up stealing from him, as well as making him a fugitive from the law. That former partner has changed his name, started another ranch in Arizona, and is a rich, powerful cattleman well on his way to being governor someday. But Rock is determined to destroy those plans and clear his own name in the process.

Unfortunately, Rock runs into another rancher, this one a beautiful young woman with a rustler problem, and he gets caught up in an effort to help her, which may put his own vengeance plans in jeopardy. Another beautiful young woman, this one from a clan of outlaws, complicates things for Rock even more. And when his true identity is revealed, he has the law and every honest man in the territory after him, bound on either jailing or lynching him. In other words, every hand is against him, and the odds of him coming out of this alive, let alone accomplishing the goals that brought him to Arizona, are very slim indeed. 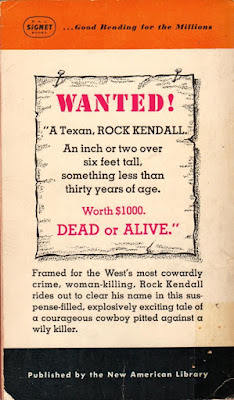 BRANDED, published in hardback by the World Publishing Company in 1953 and reprinted in paperback by Signet in 1954 (the edition I read; my copy in the scan) is the second and final novel by A.C. Abbott, an author who contributed about 70 stories to various Western pulps in the late Forties and Fifties. Earlier this year, I read and really enjoyed the first A.C. Abbott novel, WILD BLOOD, and curiosity about the author led me to discover she was really Helen Abbott Meinzer, one of the few women to write hardboiled Westerns during that era.

And BRANDED, like WILD BLOOD, is really hardboiled. Rock Kendall gets shot, stabbed, punched, kicked, and knocked out more than once in the course of this book, but he absorbs all that punishment and keeps coming back stubbornly for more as he tries to clear his name and avenge himself on the man who betrayed him. Meinzer has a fine touch with her characters, too, and the romantic relationships, even though they don’t take up a lot of space in the book, ring true, which is no surprise since she wrote a lot for the Western romance pulps with her steadiest market being RANCH ROMANCES. In the two novels I’ve read, the plots are pretty traditional, but there are a few nice twists along the way.

Meinzer died in 1963, at a fairly young age, her mid-forties. I don’t know anything about her personal life, but I do wish we had gotten more novels from her. She was an excellent writer, and WILD BLOOD and BRANDED are a limited but fine legacy. If you’re a Western fan and ever run across either of these novels, I give them a high recommendation.
Posted by James Reasoner at 6:00 AM

Born in Twin Falls, Idaho on 12 Oct 1918 to William Claire Abbortt and Helen Mae Bowlby. She married Gworgw Creighton Meinzer, and passed away on 22 Mar 1963, in Tucson, Pima, Arizona. (Taken from Ancestry.com)