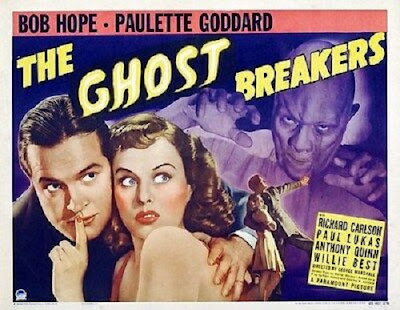 Somehow I never saw this movie on TV when I was growing up, and neither did Livia. So THE GHOST BREAKERS, the second pairing of Bob Hope and Paulette Goddard after THE CAT AND THE CANARY (which I also liked) was new to us and thoroughly enjoyable.
This movie packs a lot of plot into 82 minutes. Goddard inherits an island off the coast of Cuba, complete with an old castle haunted by ghosts and zombies. Hope is a radio gossip columnist who runs afoul of some gangsters over a story he broadcasts. Circumstances bring them together, Hope thinks he accidentally shot and killed a guy, and so to escape from the law and the mob, he hides in Goddard’s steamer trunk and winds up sailing to Cuba with her, where together they solve the mystery of what’s really going on in the spooky old castle.
THE GHOST BREAKERS is a really entertaining movie. It’s not fall-on-the-floor hilarious, but it’s consistently funny, the creepy stuff is effectively creepy, and it has a great cast, including Paul Lukas, Anthony Quinn, Paul Fix, Noble Johnson as a truly scary zombie, and in very small roles, Robert Ryan and Douglas Kennedy (literally, those last two, blink and you’ll miss ‘em). Hope is great as always, cowardly most of the time but hardboiled when he needs to be. Goddard is cute and sexy and smart and spends a surprising amount of screen time in her underwear.
But as I said to Livia while we were watching it, “I didn’t think it was possible to steal a movie from Bob Hope, but Willie Best is certainly trying.” Best plays Alex, Hope’s servant/sidekick/best friend, and is a magnificent character. A lot of the reviews on IMDB complain about “offensive racial stereotyping”, but as far as I’m concerned, they watched a different movie than I did. Despite his frequent complaints about being scared, Best’s Alex is just about the smartest, bravest character in the movie and saves the day time and again. Admittedly, some of those instances are accidents, but not all of them. And it’s clear that his character and Hope’s truly care about each other. I thought the two of them worked together beautifully, like Cosby and Culp on I SPY, and wish they had made more movies about these characters. As it is, I’m very glad I finally watched THE GHOST BREAKERS. I had a great time and highly recommend it if you’ve missed it somehow, too.
Posted by James Reasoner at 6:00 AM

I like this movie a lot and bought the DVD so I could watch whenever I wanted.

I love this movie. I grew up on unfunny Bob Hope movies of the 60s. Imagine my amazement at this, where Hope is constantly funny. Agree regarding Willie Best, his character and Hope’s seem genuine pals and both know who has the brains.

One of the best horror comedies. I rank Abbott & Costello Meet Frankenstein as number one but this is top 5.

I'm the right age to have seen all those Bob Hope movies from the Sixties at the drive-in, and while I thought they were okay, when I saw his old movies on TV I was surprised at how much funnier they were. In those days I also looked forward to the Academy Awards because he was the host every year. Always liked watching him on The Tonight Show, too.

Maybe I should revisit the 60s Hope movies. My father certainly enjoyed them. Certainly they were better than 60s Jerry Lewis. "Which way to the Front" remains one of the worst movies I have ever seen (and that includes Ed Wood).

I love the Crosby/Hope Road movies. Clever, especially when they stray from the plot and address the audience.