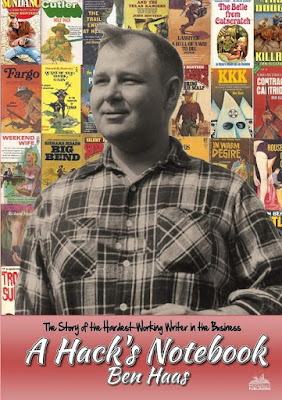 I don’t recall the first book by Ben Haas that I read. I remember seeing Fargo and Sundance paperbacks, which he wrote under the pseudonym John Benteen, when I was in college, and I’m pretty sure I owned a copy of the movie novelization ROUGH NIGHT IN JERICHO, which he wrote under the pseudonym Richard Meade, even earlier than that, but I don’t think I ever read it. So it was probably sometime in the Eighties before I read anything by him. I know I started reading the Fargo novels then. The first one I picked up may have been VALLEY OF SKULLS, which is widely acclaimed as one of the best in the series. I know I loved it. I’ve read a bunch of novels by Ben Haas since then and enjoyed every one of them. I haven’t read them all yet, but that’s okay. That gives me something to shoot for.

Which is my long-winded way of saying that when I became aware Haas’s unfinished autobiography A HACK’S NOTEBOOK was published earlier this year, I had to grab a copy and read it right away.

I’ve been acquainted with Haas’s oldest son, the acclaimed sculptor Joel Haas, through the Internet for a number of years now. He’s provided me with some material regarding his dad’s work that I’ve published here on the blog. Joel edited A HACK’S NOTEBOOK, and the fine people at Piccadilly Publishing (who publish excellent e-book versions of many Ben Haas novels) brought it out in a very nice trade paperback edition. Ben Haas’s autobiographical manuscript comprises a little more than half the book and covers his childhood and adult life, providing a lot of details about his writing and his struggle to break in as a professional author, up to the point in the early 1960s when he’s finally starting to see some real success as a writer. It’s an intriguing, very readable mix of the personal and the professional. That’s a balance that a lot of author biographies and autobiographies fail to pull off, but not surprisingly, Haas—who could always juggle plot, character, and action beautifully in his novels—does a great job of it here, too.

Unfortunately, the manuscript ends at that point, so we don’t get to read what Haas has to say about his years of greatest success. But we do get fine reminiscinces by Joel Haas and by Ben Haas’s lifelong friend and occasional collaborator Jim Henderson, plus a selection of family photos and a complete bibliography of Ben Haas’s books. This is a really excellent volume and certainly one of the best books I’ve read this year. If you’re a fan of Ben Haas’s work or great action novels or 20th Century genre fiction, or would just like a compelling look into the mind of a top-notch professional writer, A HACK’S NOTEBOOK gets a very high recommendation from me.

Posted by James Reasoner at 1:15 PM

Got it. Glad to hear my money was well spent.

Couldn't agree more, James. It was terrific but I wanted more. What a shame he died so young, only 50.

James, thanks for mentioning this book. I just ordered a copy on amazon. Price is only $9.94.