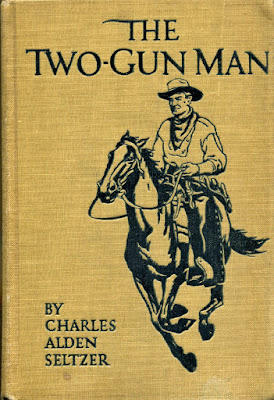 Charles Alden Seltzer was in the top rank of the first wave of popular Western novelists in the early Twentieth Century. He wasn’t as influential as Owen Wister or as popular as Zane Grey, but he held his own against such authors as Clarence E. Mulford and William MacLeod Raine, although those two are probably better known today. A few years ago, I read one of Seltzer’s Northerns and liked it fairly well, but he was much more renowned for his Westerns and I figured it was time I gave one of them a try.
THE TWO-GUN MAN was published in hardcover by A.L. Burt in 1911 and reprinted in paperback by Belmont under the title FERGUSON'S TRAIL, as well as (probably) abridged versions appearing in the March 1936 issue of WESTERN ACTION NOVELS and the November 1950 issue of THRILLING WESTERN. It’s the story of a range detective named Ferguson (I don’t think we’re ever told his first name) who is hired to find the rustlers who have been plaguing the Two Diamond Ranch. It’s implied that the boss of the Two Diamond expects Ferguson to kill said rustlers, but he’d rather bring them to justice and won’t kill them unless he’s forced to. That determination is reinforced when he discovers that the small rancher suspected of being responsible for the rustling has a beautiful sister staying with him while she tries to write a novel about the West.
As you’d expect, Ferguson falls for the sister, and THE TWO-GUN MAN, like a lot of other early Westerns, turns out to be more of a romance novel than a shoot-em-up. The plot is very simple, the real bad guy might as well be wearing a big sign on his back, and there’s only one gunfight, which comes at the end of the book, and one ambush earlier on. Only one punch thrown, that I recall.
However, don’t think that means THE TWO-GUN MAN is without any appeal. It’s well-written overall, and Seltzer does a good job of capturing the setting vividly without resorting to the sometimes over-flowery prose of Zane Grey. The characters are interesting, and the fact that the heroine is writing a novel based on the events in the book gives it a sort of meta-fiction feeling, although it was written long, long before anybody came up with the concept of meta-fiction. Yes, it’s pretty mild, but most of the Westerns from that era were, with the notable exception of Mulford’s Hopalong Cassidy books. I really need to reread some of those and see how they hold up. But to get back to Seltzer, I enjoyed this book enough that I plan to read more by him, although I probably won’t get in a hurry to do so. He’s one of the founding fathers of the Western as we know it, and THE TWO-GUN MAN is available in various public domain e-book editions, as are many of his other books. 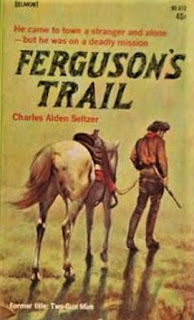 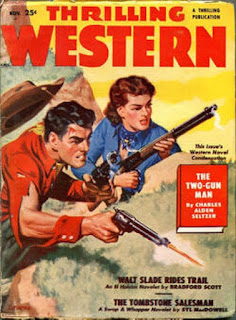 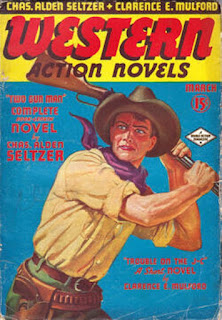