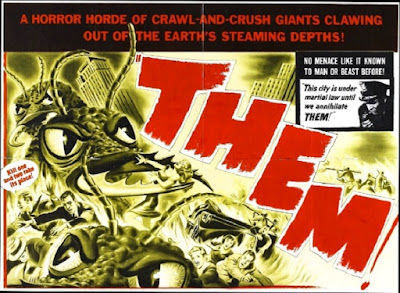 After watching BIG ASS SPIDER! a while back, I was in the mood for another giant bug movie, so when Svengoolie showed one of the granddaddies of the genre, THEM!, I recorded it and we got around to watching it this week. I’d seen this before, but the last time was more than 50 years ago, so I think it counts as overlooked.

All the staples of Fifties sci-fi horror are there: the guy who first encounters the menace and gets drawn into the effort to defeat it (a New Mexico highway patrolman played by James Whitmore); the stalwart forces of the government (FBI agent James Arness) and military (officers Onslow Stevens and Sean McClory); a brilliant but eccentric scientist (Edmund Gwenn) and his beautiful daughter (Joan Weldon), who is also a brilliant scientist. After a truly creepy opening featuring Whitmore and his partner finding a little girl wandering through the desert in a catatonic state, more grim discoveries are made as it becomes apparent that something is killing the inhabitants of this sparsely populated area. The giant ants (mutated by nuclear tests at White Sands, natch) soon show up and go on a rampage, and our heroes gather to do battle against them, a war that ultimately winds up in the sewers underneath Los Angeles.

But all of you know that because you’ve seen this movie, too. But maybe a few of you haven’t. When we watched it, Livia commented that she didn’t remember ever seeing it before. I remembered the basics of the plot, but that’s all.

What I didn’t recall is what a really well-made movie THEM! is. Director Gordon Douglas, who made some pretty good Westerns, too, keeps things moving along very nicely, the photography is excellent, and the special effects are pretty good for the era. But the cast really carries this movie. James Whitmore isn’t who you think of when you talk about action heroes, but he does a fine job as an average joe caught up in something big and terrible. Edmund Gwenn is good in anything (although, yes, it is hard not to think about MIRACLE ON 34TH STREET when he’s talking). James Arness wasn’t a great actor at this point of his career, but he already has a really commanding screen presence. And there are a few moments, when his character loses his temper, that pure Matt Dillon comes through. Fess Parker, Davy and Dan’l his own self, is great in a short scene as a Texas rancher who encounters the giant ants and is locked away in the loony bin when he tells his story. (Yes, I know “loony bin” is politically incorrect, but it wasn’t in 1954.) Elsewhere in the cast are Leonard Nimoy (don’t blink, or you will miss him), Western stalwart Dub “Cannonball” Taylor, and former major league infielder John Beradino, a fine character actor who appeared in countless Western and detective TV series in the Fifties before settling down to a long run as Dr. Steve Hardy on the soap opera GENERAL HOSPITAL. He was actually the leading man/protagonist of GH in its early years.

We also get the usual Fifties sci-fi lectures and veiled warnings about the unknown dangers of nuclear weapons, all of them delivered by Gwenn in distinguished but ominous tones. So THEM! checks the right boxes and pushes the right buttons for its genre, but it does that so well that I found it a pure pleasure to watch. I really enjoyed it, and if you haven’t seen it lately, or at all, I think it’s well worth the time.

Besides, in what other movie will you ever see Matt Dillon shake hands with Santa Claus?

THEM!, along with The Thing From Another World and It Came From Outer Space make up a triumvirate of my all-time favorite 1950s SF films. I ended up buying the DVDs of all 3 this year, but there's nothing like catching them on TV as you flip channels. When I do, I always stop.

A fourth film I enjoy is The Day the Earth Stood Still.

Those are four excellent movies. The Day the Earth Stood Still scared the heck out of me when I first saw it as a kid.

You would have thought that modern scientists would have learned from the classics that some things were not meant to mess with, as in using dinosaur DNA.

Yeah, the question "What could possibly go wrong?" gets asked pretty often around here.

My favorite 50s SF would be a very long list. The Thing is on top. Them, Tarantula and basically any Jack Arnold film. Fiend without a Face. Creature series. Guilty pleasures like Giant from the Unknown, Deadly Mantis, Giant Claw. I won’t go on.

James, don't forget the ending where the soldiers have at the ants up close and personal with tommy guns and flamethrowers, sharply staged by Douglas. The latest giant-critter movie I've seen is THE MEG, with Jason Statham vs. a giant prehistoric shark unwittingly disturbed by oceanographers. How the producers missed calling it JURASSIC SHARK I'll never know.

I saw this movie on the late show when I was in high school and loved it. Need to watch it again.