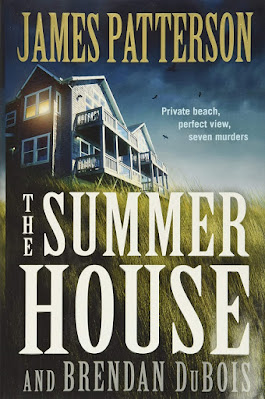 I haven’t read a James Patterson book in a while, but I picked up THE SUMMER HOUSE because the co-author (who probably did most of the actual writing) is Brendan DuBois, who I know to be a good writer. And not surprisingly, THE SUMMER HOUSE turns out to be a pretty darned good thriller.

It opens with the brutal mass murder of seven people in an old vacation house in Georgia (the summer house of the title), and soon after, four Army Rangers from the nearby military base are arrested for the crimes. Army CID sends in a team of investigators to look into the case, even though it seems pretty open-and-shut. Guess what? It’s not. All sorts of sinister things are going on, and pretty soon our Army detectives are up to their necks in mysteries and danger.

Three of the investigators consider themselves cops more than soldiers: the leader, a former NYPD detective who was seriously wounded while serving in Afghanistan; an ambitious former detective from Los Angeles; and a female former highway patrol officer from Maryland. The other two members of the team are a lawyer and a psychologist, who aren’t really cut out for action but find themselves forced into such situations anyway. For most of the book, they all seem pretty overmatched against the vast, shadowy, sinister forces arrayed against them.

Patterson and DuBois do a couple of things I really don’t like. The book is written in present tense, and it switches back and forth between first and third person. There’s only one first person POV, though, which at least helps a little. Those things can be overcome, though, if the story and characters are good enough, and they are in THE SUMMER HOUSE. The authors keep things moving along at such a nice pace that I had no trouble sticking with the book, even though it’s a little longer than the novels I usually read. (It’s not a real behemoth. Maybe 100K words.) By the last fourth of the book, I was really flipping the digital pages to find out what was going to happen, and that’s one of the best things I can say about any novel.

Patterson and DuBois have done a couple of other books together, and I enjoyed this one enough that I think there’s a good chance I’ll go back and read them, too. I’m not a big fan of contemporary thrillers, but I liked THE SUMMER HOUSE and think it’s well worth reading.

Posted by James Reasoner at 9:03 AM

I don't do well with books written in the present tense, either.

Better wake-up, pops,
or the Rapture is gonna
pass-you-by: you gotta
spend 7 yeeers in chaos
if it does. This'll help.
GBY