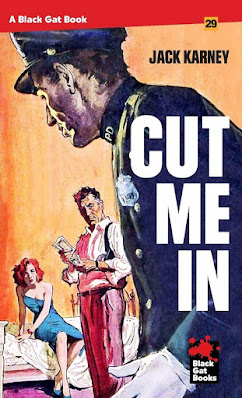 Black Gat Books has reprinted several excellent novels involving cops and organized crime, such as Louis Malley’s STOOL PIGEON and Ferguson Findley’s MY OLD MAN’S BADGE. Originally published as a paperback original by Pyramid Books in 1959, CUT ME IN by Jack Karney is a worthy addition to that group. The protagonist is Coley Walsh, a rookie policeman in New York City who has a couple of tragedies in his past haunting him. Coley also has ambition, and he quickly rises in the ranks to become a plainclothes detective working directly for the captain of his precinct. The thing is, Coley’s job is to collect all the graft that the corrupt captain is raking in, and he takes to this assignment right away. His ambition and ruthlessness help him seize other opportunities, and soon he’s taking on the Syndicate, not out of any altruistic motives but because he wants to start a criminal organization of his own.
Ah, but you know as well as I do that such plans never quite work out in noir novels. When Coley falls for a beautiful model who works for a company the Syndicate wants to take over, it complicates things for him. He gives up his battle against the Syndicate and joins them instead, not only to try to protect the girl but to further his own crooked goals as well. It’s only a matter of time, though, before everything goes to hell for Coley Walsh. 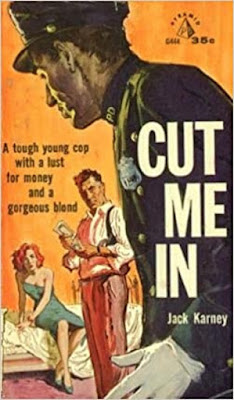 Jack Karney, who lived his entire life on Manhattan’s Lower East Side, worked for the District Attorney’s office in New York City, so he brings an undeniable authenticity to this sordid tale. CUT ME IN is a little slow to develop its plot in the first half of the book, but once things start rolling, Karney proves to be a fine storyteller and the final scenes generate a lot of genuine, page-turning suspense. For most of the novel, Coley Walsh isn’t a very likable protagonist, but the reader winds up rooting for him anyway. I enjoyed CUT ME IN quite a bit. It’s another entry from Black Gat Books that’s well worth reading.
Posted by James Reasoner at 6:00 AM