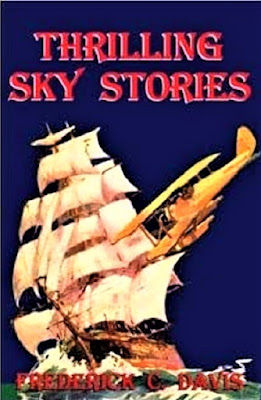 Over the past few years, Frederick C. Davis has become one of my favorite pulp authors. I’ve always liked his work ever since reading those Corinth paperback reprints of some of his Operator 5 pulp novels, back in the Sixties. I hadn’t really realized how many different genres Davis wrote in, though, until recent years.

THRILLING SKY STORIES is a 2005 small press collection of aviation yarns Davis wrote, including two novellas and a short story. I’ve had it for years but just got around to reading it. The volume opens with the novella “The Sky Pirate”, from the April 1929 issue of AIR STORIES. A mysterious, all-black plane is involved with a series of daring robberies. The thieves strike at a ship at sea, a gold mine in the mountains, and a bank in a San Francisco skyscraper. It’s up to a pair of stalwart, two-fisted Border Patrol pilots to track down the mastermind behind these bizarre crimes, but their investigation has barely started when one of them finds himself framed for a crime he didn’t commit, a twist of fate that turns him against the law, too. 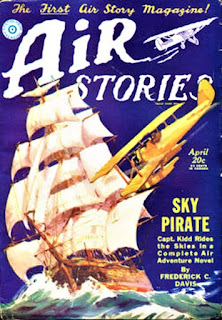 The prose in this yarn from fairly early in Davis’s career isn’t as polished as it would be later, and his plotting is a little weak and driven by too many coincidences . . . but man, the action scenes are great. Also, he was a master at coming up with slam-bang endings where the action continues to the very last paragraph, and he provides a fantastic one here that would have called for some great flying and stunt work if Hollywood had ever made a movie out of this tale. I was really flipping the pages in the last chapter, and any time an author can make me do that, I’ll forgive a lot of other weaknesses. “The Sky Pirate” is a mixed bag, but overall I enjoyed it quite a bit. 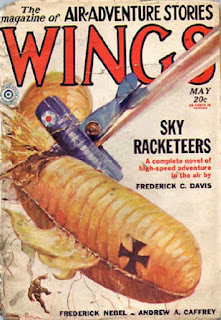 “Sky Racketeers”, a novella from the May 1930 issue of WINGS, is exactly what it sounds like, a tale of how gangsters work the ol’ protection racket on an airline. Also as you’d expect, a stalwart, two-fisted pilot gets the job of stopping them, with help from his mechanic sidekick. The plot is a little better in this one, but some of the coincidences still stretch credibility too far. Again, however, the slam-bang ending is great.

This volume wraps up with “Patrol of the Dead”, a short story from the Spring 1937 issue of AIR STORIES. It’s a sequel of sorts to “The Sky Pirate”, featuring the same Border Patrol base and one of the same supporting characters from the earlier story. It’s about the conflict between the Border Patrol and an organization of Mexican drug smugglers (an early day drug cartel, in other words) and is better written and plotted than the other two stories in this book. It lacks the huge climax, but there’s still some good action. 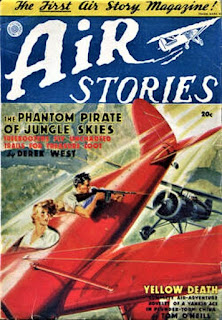 I enjoyed THRILLING SKY STORIES. It’s not a book I’d recommend to anyone who hasn’t read Davis’s work before, since it’s not as good as some of his other work, but anyone who’s already a fan, or who just really likes aviation pulp, will get some good entertainment out of it.
Posted by James Reasoner at 6:00 AM

Very good author even when the concept was the Moon Man. I have not read many “air” pulp stories, I don’t think G8 counts.

I may not be accurate with the author in this story but I recall many years ago on a yahoo pulp page or something, someone posted “my grandfather’s brother was a pulp writer, did you all ever hear of him” and the name was Frederick Davis.

I believe it's Frederick C. Davis's granddaughter you're thinking about. Her name is Karen Cunningham and she's attended some of the pulp conventions.

I have the Gales & McGill books but haven't dipped into them yet. My experience with the aviation pulps is minimal.

I've found Fredrick C. Davis's work almost uniformly excellent and he really did have a flair for the satisfyingly over-the-top climactic action scene. I think it was the second Operator #5 that ends with a battle on the top floors of the Empire State Building that becomes so desperate that our hero calls in a barrage from the battleships in New York Harbor that takes off the top of the building.

In one of the Operator #5 novels reprinted by Dimedia in the Eighties, Jimmy Christopher swoops up on a rope attached to a plane (or something like that, it's been a long time since I read it) just as a bunch of stuff blows up real good all around him, narrowly escaping from the apocalyptic destruction. And Davis manages to pull this off in the last couple of paragraphs of the novel. Talk about a slam-bang ending!