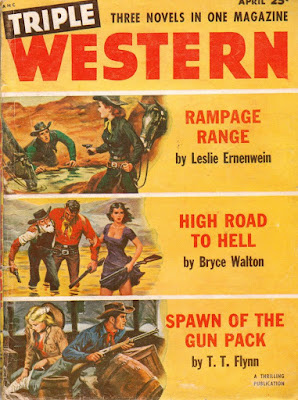 This is a pulp I own and read recently. The scan is from the copy I read. Novellas have become just about my favorite length of fiction over the past few years as my time (and my attention span) have decreased, so I really enjoy pulps like this.

I remember reading at least one novel by Leslie Ernenwein and enjoying it, but that didn’t prepare me for just how good his novella “Rampage Range” is. There’s nothing special about the set-up: Jim Maiben is released from Yuma Prison after serving three years for arson (a crime he didn’t commit, of course) and returns to his home range to find that his ranch has been sold out from under him by the bank, everybody believes he’s a criminal and doesn’t want anything to do with him, and naturally there’s a bunch of rustling going on, too. Oh, and the guy who took over Jim’s ranch has a beautiful daughter. Well, with a plot like that, you’d think that you knew everything that was going to happen in this story . . . but you’d be wrong. Some of the characters turn out to be different than what you’d expect, and if in the long run things are resolved in typical fashion, getting there takes some unusual twists and turns. Ernenwein’s style is very effective, too, hardboiled in places, poetic in others, and there’s a surprising amount of sensuality as well. This story reminded me very much of the work of L.P. Holmes and made me eager to read something else by Ernenwein in the near future.

Seems like I've read stories by Bryce Walton before, but I couldn't tell you anything about them. He's best known for science fiction and hardboiled crime yarns, but he wrote quite a few Westerns for the pulps as well. His novella in this issue, "High Road to Hell", also has a standard plot: a drifting outlaw becomes involved in a range war between cattlemen and nesters. It's very reminiscent of SHANE, although this story had to have been written before the movie came out. Walton could have been influenced by Jack Schaefer's novel, though. More likely it's a case of there being only so many plots in the world. Walton's novella is pretty good, written in a hardboiled style that suits it well, and the action in it hardly ever lets up. There's one major coincidence in the plot that's a little hard to swallow, but other than that I enjoyed "High Road to Hell".

Next up is a short-short by Jonathan Craig, better known for his police procedural novels published by Gold Medal and assorted other hardboiled crime novels. "Slow Poison" is a psycological suspense tale about a man searching for his wife and the man she ran away with. (As I was reading it, I kept hearing Moe Howard in the back of my mind, saying, "Niiiiiagara Falls!") There's nothing particularly Western about this one—it could have played out almost exactly the same in a modern setting—but Craig is a good writer and makes a readable three pages out of not much.

The novella "Spawn of the Gun Pack" is by one of my favorite Western writers, T.T. Flynn. This is a reprint from the April 19, 1941 issue of WESTERN STORY, where it was the featured story on the cover. The set-up is familiar here, too: a teenager who is the son of a notorious outlaw and smuggler sees his father gunned down in an ambush because he was double-crossed. The protagonist takes to the owlhoot trail himself and vows to track down and kill the man responsible for his father's death. Enough time passes to give this yarn a bit of an epic feel, and then the hero finally gets a lead that takes him to a New Mexico mining boomtown. What he finds there isn't what he expected, as Flynn gives us some back-story worthy of Walt Coburn and then puts a nice twist on it. A lot more action ensues, told in Flynn's straightforward but highly effective prose. A pursuit scene across a lava bed is very suspenseful and reminded me of Louis L'Amour's FLINT. I've never read a bad story by Flynn, and this is a very good one.

There's also a "fact story" about the notorious outlaw Jack Slade by Gladwell Richardson, who's best known for his fiction. This is a pretty good article, and I'm not a fan of such historical features in pulps.

Overall, this is a really good issue of TRIPLE WESTERN with a decent triple-decker cover by Clarence Doore and three novellas well worth reading. I have more issues of this pulp and will be reading my way through them in the months to come.
Posted by James Reasoner at 5:30 AM

It's always puzzled me how the western fiction genre could go from scores of pulp titles to nothing on the newsstands. And it happened real fast. Why?

I would say TV westerns, original paperback novels like the ones that Gold Medal and Ace were publishing and the simple economics of publishing. It was too expensive to publish a pulp for 25 cents and a lot cheaper to distribute digest magazines and paperbacks.

I'm hoping "Rampage Range" is the same yarn as "Rampage" published by Gold Medal because I just ordered the paperback from Amazon. Even if it's not, I don't think I've wasted my money. I've read Ernenwein before and enjoyed him.

I don't know if it's the same or not, but I had to look up the Gold Medal, and dang, that's a good-looking book! You'll have to let me know what you think of it.