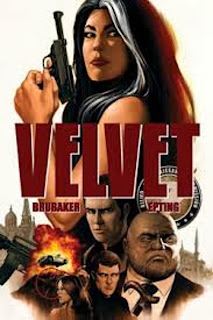 Normally I don't blog about single issues of a comic book, preferring to wait until there's a collected edition available, but I'm going to make an exception for VELVET #1, the first issue of a new spy series written by Ed Brubaker and drawn by Steve Epting, the team responsible for some of the best Captain America stories in the past twenty or thirty years.

According to Brubaker, he wants VELVET to be a cross between the more over-the-top secret agent stuff like James Bond and The Man From U.N.C.L.E. and the grittier espionage fiction of authors such as John Le Carre. I think he's succeeded admirably in this first issue.

Set in the late Sixties and early Seventies, the story centers around the activities of Arc-7, a top secret, ultra-hush-hush spy agency with headquarters in London. I'm not sure if it's supposed to be a British agency or an international one like U.N.C.L.E., but that doesn't really matter. One of their agents is murdered while on a mission, and the leaders of the agency quickly decide that there's a traitor in their ranks, a former top field agent who now trains other agents.

But Velvet Templeton, the secretary to the agency's director, believes that the man being blamed for the leak (who happens to be a former lover of hers) is actually being framed, so she sets out to do some investigating of her own. And Velvet has some secrets in her past that make things even more interesting, so that by the end of this issue Brubaker has thrown in some very intriguing twists along with plenty of action.

Since I was a huge fan of all the espionage novels, movies, and TV shows from the Sixties, VELVET is right in my wheelhouse. Brubaker is one of the best writers in the comics business, and I've always enjoyed Epting's stylish artwork and top-notch storytelling. This first issue also includes a fine essay by Jess Nevins, "A History of Spy Fiction Through the Cold War". I really enjoyed this one and look forward to the next issue. Whether you read it as it goes along or wait for the hardback or trade paperback, VELVET gets a high recommendation from me.

Glad you posted this. I went out and got an issue yesterday. I'm a big fan of Brubaker's CRIMINAL and FATALE series. This looks like it's going to be a good one too.