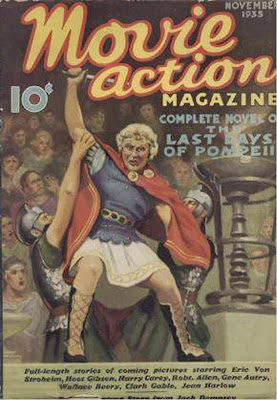 Here's a pulp I'd never heard of. The stories in it are movie novelizations, proving that genre has been around for a long time. The movies in it include THE LAST DAYS OF POMPEII, THE CRIME OF DR. CRESPI, POWDER-SMOKE RANGE, CHINA SEAS (which I featured on Tuesday's Overlooked Movies a while back), GUARD THAT GIRL!, and TUMBLING TUMBLEWEEDS. All of the stories were written by Laurence Donovan except for CHINA SEAS, which is by Edwin V. Burkholder. I'm not sure how much detail they could have included in 10 to 15 page short stories. Looks like an interesting oddity, though.
Posted by James Reasoner at 6:30 AM

For a few years --- back in the early/mid 60s, when "slick" movie star-related magazines like Photoplay, etc. were still a big thing --- there was a magazine *sort of* in that vein called Screen Stories. It had a few movie star articles in each issue but then it also had short story-versions (complete with photos) of popular current movies. I don't know how long it lasted, but it seemed like a few years. My mom bought a lot of these kind of mags and when she bought Screen Stories, I would read the stories. (I wasn't above looking at the pictures of pretty actresses, either, but what I remember most of all - this is gonna sound like the old saw about reading Playboy for the articles, but I can't help it - was seeking out the stories.) Among others, I remember reading the SS versions of The Man Who Shot Liberty Valance and El Dorado there. I have no idea who the writers were but, thinking back on it now, the stories actually managed to do a pretty darn good job of capturing the actual movies I saw and was able to make a comparison.

Wayne,
I think I vaguely remember SCREEN STORIES. Never read an issue, but I saw it on the magazine racks. In the Sixties and early Seventies you really could read PLAYBOY for the fiction.

Concerning PLAYBOY, nobody believes me but I really did buy it for the fiction and articles. It used to be a very high paying market and had some great fiction editors buying stories. Those days are gone...

I used to buy OMNI for the fiction also.

I tried for years to sell a story to PLAYBOY. No luck, of course. I rarely look at an issue now, but they don't seem to be much of a market for fiction anymore. The Sixties issues always had three or four short stories by the likes of Irwin Shaw, Richard Matheson, Robert Bloch, etc. And those great memoirs by Jean Shepard, which were my favorites.

Jean Shepard was great. My wife and I both listened to his radio show. He would drive me crazy talking about pizza with the works. Now it would probably kill me to eat a slice. Everybody knows about CHRISTMAS STORY but he did several hour long films for PBS about his childhood and his father.

Donovan was a pretty good writer. Be interesting to see what he'd do with those stories, especially the westerns.