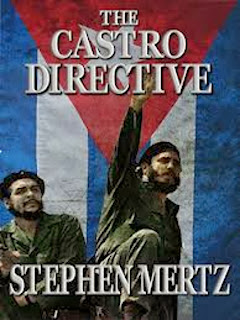 Stephen Mertz has been one of the leading authors of adventure fiction and a good friend of mine for more years than I like to think about. His latest novel THE CASTRO DIRECTIVE is a fine addition to his body of work, and it's a special pleasure and honor for me to read it since it's dedicated to me.

Set in 1961, it's the behind-the-scenes story of the disastrous Bay of Pigs invasion and the aftermath of that bungled operation. Aware that Castro has a mole somewhere in the group of Cuban refugees planning the invasion, President Kennedy sends for a special operative, Green Beret Sergeant Michael "Graveyard" Morgan, to root out the spy.

A book like this is very tricky to write. Most readers already know the historical outcome, so in order to generate any suspense you have to make the story about how events wind up the way they did. In other words, the story is about the journey, not the destination. Mertz does an excellent job of accomplishing this by coming up with compelling fictional characters and some plausible twists and turns that probably didn't happen but could have. He also makes good use of the historical characters and events. The scenes featuring JFK, Bobby Kennedy, and other historical figures come across as very authentic.

Then, part of the way through, Mertz throws in another highly effective twist by involving Graveyard Morgan's estranged wife and daughter in the mix and making the mission personal for him. This ratchets the suspense up to an even higher level.

I remember this era and the Bay of Pigs invasion fairly well, although I was pretty young at the time and more concerned with surviving elementary school. But I recall enough, and have studied enough history since then, to know that Mertz does a top-notch job capturing that time period. If you want to read an excellent historical thriller by a real pro at the top of his game, you definitely should check out THE CASTRO DIRECTIVE, which is available in both trade paperback and e-book editions. It gets a high recommendation from me.

I read this last year and agree with your analysis. It also gave me a view of JFK that wiped away all of the ideas I had of Camelot when I was a kid.