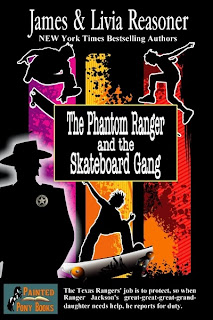 Codi Jackson and her father have been forced to move again. Codi’s getting used to being the “new girl” in her fifth grade class—but that doesn’t mean she has to like it. Can’t life just be normal? With her mother out of the picture and her father working odd shifts as a police officer, friends are important—as long as they’re not the wrong kind.

When Codi and a classmate, Keith Wright, are assigned to work on a history project, Codi has to make some hard decisions about her popularity in her new school.


But everything changes when Codi picks up an old Texas Rangers badge that belonged to one of her ancestors and he appears right before her eyes! Her great-great-great-grandfather says he’s come to help her, but how? And how is she going to explain the ghost of her long-ago Gramps to her history project partner and her father?

(This is one of the few unpublished, completed novels we had left after the fire in '08, and now it's the launch book for Painted Pony Books, the new juvenile imprint put together by Livia and Cheryl Pierson. It's a middle-grade book, 27,000 words long, with some mystery, some paranormal stuff, and some Western influence. Even though it's aimed at kids, I think some of you might enjoy it as well. It's available in both e-book and trade paperback editions.)