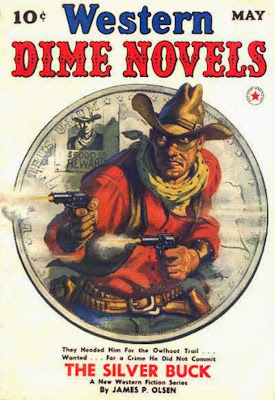 I'm not sure why somebody at Munsey's decided to use the term "dime novel" in the title of this pulp when it's clearly not a dime novel and it had been more than twenty years since any of them were published. But hey, who knows why publishers do the things they do? The cover's not bad, and the line-up of authors is a good one. I've never read any of James P. Olsen's Silver Buck stories, but I've enjoyed his other work that I've read. E. Hoffmann Price and Chuck Martin also have stories in this issue.
Posted by James Reasoner at 6:30 AM

When I compare the cover of this one, or most of the pulps you post on weekends, to the cover of the book in the post right below, it highlights what a shame it is that cover art has deteriorated so much. Not on everything, but on an awful lot. There are a lot of good artists out there, I guess much of the time the people responsible for the cover are just too cheap.

Richard's "cheap" verdict on covers may not be false, but it doesn't recognize the realities of publishing in 2013. The pulp magazines, and the genre paperback originals that followed them, sold in thousands by the month. It was possible for publishing companies to pay all their bills and still make profits. Today even the low-budget reprint lines, like Leisure Books, are largely gone. The "mid-list" writer who wants to continue catering for a diminishing fiction readership, must look to self-publishing opportunities in POD books and ebooks. But these for the most part sell in hundreds rather than thousands. Commissioning new cover art from a top-class, professional artist would cost more than the financial returns from a book in its first year, and who knows how many copies or downloads would be sold after that?

Naturally, very few self-publishing authors are prepared to invest the necessary money, although I would accept that in many genres well-heeled, newcomer hobbyists can and do afford a little self-indulgence in pleasing their readers with stunning covers if nothing else.

When I began writing Westerns -- now that most "niche" of genres -- my books appeared in the same format and on the same publisher's list as reprints of books by the likes of Ernest Haycox, William Colt MacDonald, Barry Cord, L. P. Holmes, Frank Bonham, and Lewis B. Patten. I tried hard to ensure they were worthy to seen in such company. That's no longer possible with the publisher still paying the same unrealistic advance against 10% royalties -- an advance that will never be earned out because the publisher's print run for the limited market is set too low to let it happen!

The alternative, self-publishing route is not exactly financially rewarding in my experience. I can fully understand why excellent story collections by experienced, veteran authors don't have brilliant covers. They have the good sense to realize they may no longer be around when their cost is finally recouped.

Chap O'Keefe has a valid point. In addition as a magazine collector, I can easily see that the golden age of illustration was in the pulp and slick magazines of the 1900-1960 era. After 1960 the pulps were dead and gone and the slicks were winding down, no longer using much fiction and thus very little original art on the covers and inside illustrations. They started to use photos for the covers.

For instance excellent former pulp artists like Walter Baumhofer, Norman Saunders, Rafael Desoto, all had to accept lower pay from the mens adventure magazines and paperback publishers in the 1960s just to keep working. The enormous number of fiction magazines no longer existed on the newsstands.

Now original illustration art just about has no market. Computer generated art and other methods have replaced the former paintings on canvas and board.

The cover art we see today simply cannot compare to the art that used to grace the slicks and pulps. In the SF world is there anyone who can compare to Emsh, Hannes Bok, Virgil Finlay, Richard Powers and others of the prior decades?

Are there any great illustrators who can compare to the great pulp artists like Nick Eggenhofer, Saunders, Baumhofer, Desoto, and others?

The market has changed and the self published and print on demand books have cover art that simply is not as impressive as the golden age illustrations. E-books have even worse examples, sometimes no art at all.