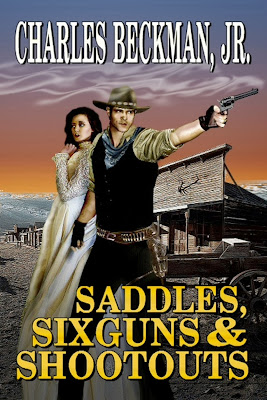 Charles Boeckman is one of the few genuine pulp authors still with us, and it's quite possible he's the only one still actively writing and publishing. Writing under the name Charles Beckman Jr., he was a prolific contributor to the Western and detective pulps during the late Forties through the Fifties and has written many novels since then.

SADDLES, SIX-GUNS & SHOOTOUTS is a collection of his stories from the Western pulps, and it's a fine introduction to his work for anyone who hasn't sampled it yet. Since the book came out earlier this year, it isn't really forgotten, but since Boeckman's writing isn't nearly as well known as it should be, I think we can stretch the definition that far.

The opening story, the novelette "Brazos Woman" (STAR WESTERN, October 1953) is an epic in miniature, with enough plot for a lengthy historical novel. Beautiful widow Renee D'Aquin flees New Orleans in the 1820s with her two young children and heads for Stephen F. Austin's new colony in Texas. Along the way she encounters a rakish gambler who will move in and out of her life over the next decade. In Texas Renee has to battle against sickness, savage Indians, and finally the tragedy and heroism of the Texas Revolution, culminating with the Runaway Scrape and the Texans' victorious last battle against Santa Anna's army at San Jacinto. As you might expect, with this much going on the pace never slows down much. Boeckman does a good job with the setting, and Renee and the gambler Joseph Smith are both excellent characters complete with human flaws.

"Badman From Boston" (FIFTEEN WESTERN TALES, January 1947) finds a crippled Easterner trying to recuperate from tuberculosis in the dry climate out west so he can have an operation that might enable him to walk again. An avid reader of dime novels, he spins some yarns of his own that put him in the position of having to pick up a gun and take on some outlaws. This is a fine, poignant tale.

"Rusty Guns", from the March 1947 issue of FIFTEEN WESTERN TALES, asks a question you don't encounter very often in Westerns: what happens to a gunfighter who faces off against someone faster on the draw but survives the resulting shootout? This noirish tale provides a very effective answer.

"The Kid Comes Back" (NEW WESTERN, January 1952) is a revenge tale about a young man who returns home to settle the score against the cattle baron responsible for his father's death. That's a pretty standard plot, but the method the hero chooses to get his vengeance is pretty unusual, and so is the twist at the very end of the story. Those things make this an excellent yarn. 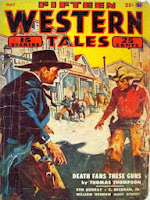 "The Last Bullet", from the May 1954 issue of FIFTEEN WESTERN TALES starts where many stories would end: with a posse gunning down the notorious outlaw and killer Jimmy Laredo. In Boeckman's West, though, not everything is as it seems, so that's just the beginning of a very hardboiled tale of love and vengeance.

"Stagecoach to Hell" (WESTERN ACE HIGH STORIES, April 1954) is about a former badman who has made a new life for himself in a small town, until his past is about to catch up to him in the form of an old enemy who wants him dead. It's a standard plot, but this story is distinguished by some good writing and a particularly touching ending. 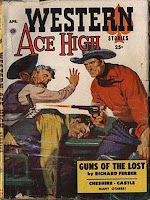 "Home is the Killer", from the March 1953 issue of FIFTEEN WESTERN TALES, is set in the days soon after the Civil War when Texas was a particularly hard place to survive. A returning soldier helps out a widow and her son and finds himself chasing a dream that his own violent past may not let him catch.

Bull Hubler, the protagonist of "Bitter Reunion at Rimcock" (10 STORY WESTERN, May 1947) is the sheriff of Rimrock and a successful businessman who operates a freight company, but he's also a moody drunk whose wife left him several years earlier to run away with a gambler. Now she's back with a proposition that means either redemption or death for Bull.

"The Devil's Deadline" (.44 WESTERN, January 1954) features an offbeat protagonist: an aging newspaperman who has to decide if he wants to take on the corrupt lawman who rules a small frontier town. This story is also unusual in that Boeckman comes up with an unexpected way of resolving the conflict, and this twist provides a very satisfactory ending. 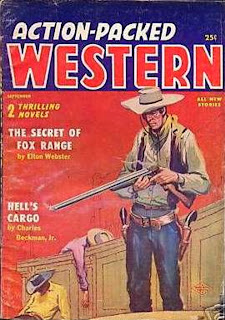 This volume comes to a rousing conclusion with "Hell's Cargo", a novelette from the September 1956 issue of ACTION PACKED WESTERN. As you might guess from the title, it's a riverboat yarn, as ace river pilot Steve Kent returns to New Orleans right after the Civil War to settle a score with his former mentor, who has stolen both fiancée and riverboat from Steve. But instead he finds himself in a race with his sworn enemy to see which man's boat can retrieve a fortune in furs from Fort Benton, high up the Missouri River. That the owner of the furs is a beautiful blonde is an added complication. Boeckman really pulls out the stops in this one, which action galore and just enough romance. It's my favorite story in the book and would have made a great John Wayne movie.

A while back I mentioned that despite the claims of some, there are still a lot of great stories in the pulps just waiting to be reprinted. SADDLES, SIXGUNS & SHOOTOUTS is vivid proof of that. Boeckman really should have had some collections of his work published by Leisure, Five Star, etc., so more people would be familiar with it. Even a long-time Western pulp fan like me hadn't really heard of him until a year or so ago. Thank goodness his stories have made a comeback, with a collection of his mystery and detective yarns and several novels currently available. I hope this is just the first collection of his Westerns with more to come, because it's one of the best books I've read this year.