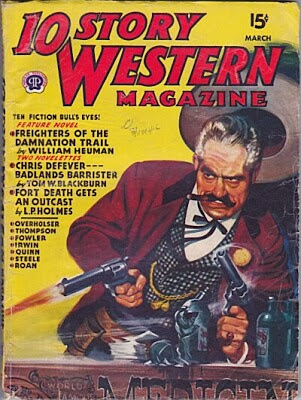 This week's cover comes to us courtesy of Keith Chapman, and he sent me a scan of the table of contents page, too, since this issue isn't in the Fictionmags Index. It's almost an all-star issue with stories by William Heuman, Tom W. Blackburn (part of his Chris Defever series), L.P. Holmes, Wayne D. Overholser, Thomas Thompson, Tom Roan, and Gunnison Steele. The other authors, Kenneth Fowler, Joseph W. Quinn and Charles Irwin, also published a number of stories in the Western pulps during the Forties. 10 STORY WESTERN was a consistently good pulp, and this looks like an excellent issue. 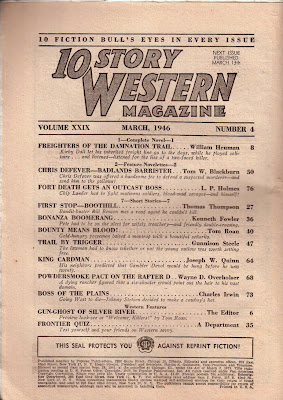 This is another reminder of how Popular Publications once had a really great line of western titles. Though DIME WESTERN and STAR WESTERN were their top western pulps and paid the best word rates, even the lesser titles like 10 STORY WESTERN had many excellent writers.

And collectors can still get these issues for reasonable amounts on ebay and Pulpfest.

If anyone wants to compile their own index page for this issue from the contents page, they should be aware that the cover's "Ten fiction bull's eyes!" include two short biographical articles. King Cardman is about frontier gambler George Devol. Boss of the Plains is about hatmaker John B. Stetson.

Top to bottom, Popular was the best Western pulp line, in my opinion. BIG-BOOK WESTERN is another excellent magazine. I haven't read many issues of .44 WESTERN or NEW WESTERN, but what I've read of them have been good, too.

Although an argument could be made for Street & Smith, too, with WESTERN STORY, WILD WEST WEEKLY, and WESTERN ADVENTURES.

Popular Publications had so many western titles that we are even forgetting some like ACE HIGH WESTERN(which they took over from Clayton), FIFTEEN WESTERN TALES, and later on WALT COBURN WESTERN. An amazing amount of western fiction hitting the newsstands every month and now we are down to almost zero.

What we do have every month is a steady stream of western fiction uploaded to the eBook retailers. Of course, I would accept the point that much of this is not professionally edited and published as Popular Publications pulps were. But James generally points us in the direction of the good stuff right here. The post above this would be an example.