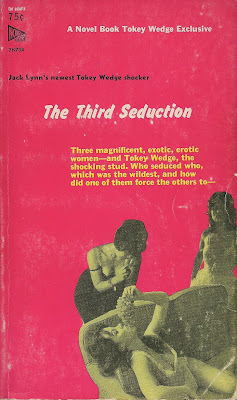 I've read quite a bit about the Tokey Wedge series over the years, but I've never sampled any adventures of the diminutive private eye until now. THE THIRD SEDUCTION was published in 1964 by Novel Books (the same company that published Ennis Willie's Sand series and a number of Orrie Hitt's best novels). It's possible it's a retitled reprint of an earlier book in the series, since Novel Books was notorious for doing that.

Tokey Wedge is five-six, a hundred and forty-five pounds, and looks a little like a smaller version of Shell Scott (not a coincidence, clearly). Despite being smaller than most paperback heroes, he's plenty tough and doesn't hesitate to take on hoodlums and killers a lot bigger than he is. Like most fictional private eyes of the era, he has a long-suffering friend on the police force, and his on-again, off-again girlfriend is a beautiful blond reporter.

As THE THIRD SEDUCTION opens, Tokey is trying to date a beautiful stripper. Wouldn't you know it, no sooner does she agree to go out with him than they're kidnapped by a .45-toting goon who tries to murder them. Tokey manages to get himself and the stripper out of this fix, of course, and then the question becomes which one of them the killer was really after. 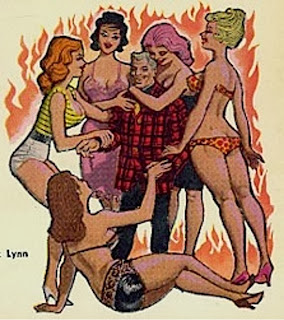 From there the plot quickly turns into a complicated mix of revolution on an island nation in the Caribbean (in the words of Woody Allen, a fictional but real-sounding country), a looted treasury, feuding beautiful sisters, torture, attempt after attempt on Tokey's life, and finally imprisonment in the mansion of the evil mastermind, complete with a death trap like something out of a James Bond movie. In the midst of all that hectic action, Tokey manages to find time to take several beautiful women to bed, of course.

So, does it all make sense? Well, sort of, although there's a definite feeling that the author was just making it up as he went along. I don't think anybody read these novels for their well-constructed plots, though. They were read for the sex (which like most so-called sexy books from the Fifties and early Sixties is really pretty mild, consisting of leering innuendo more than anything else), the action, and the wise-cracking comedy. Tokey Wedge seems to have been influenced more by Richard S. Prather's Shell Scott novels than anything else, although there's some Dan Turner and Mike Hammer in there, too. Based on an admittedly limited sample, this one book, I'd say Tokey was aimed at readers who found Prather, Bellem, and Spillane just too sober and restrained.

For a long time, the identity of the author, Jack Lynn, wasn't known, but Steve Mertz has done some sleuthing and turned up strong evidence that Lynn was really Max van derVeer, an author who published several stories in MIKE SHAYNE MYSTERY MAGAZINE and ALFRED HITCHCOCK'S MYSTERY MAGAZINE during the Sixties. I seem to remember reading that he may have ghosted some of the Shayne stories in MSMM, too, but I could be wrong about that. I know he was living in Corpus Christi, Texas when he passed away in 1979. There's no telling what other books he may have written under pseudonyms.

I had a good time reading THE THIRD SEDUCTION, but it's definitely politically incorrect and anybody considering reading it or any of the other Tokey Wedge books needs to bear that in mind. It doesn't rise anywhere near the level of the books that inspired it, but it's still entertaining and a nice time warp back to a goofier, more innocent era in paperback fiction. 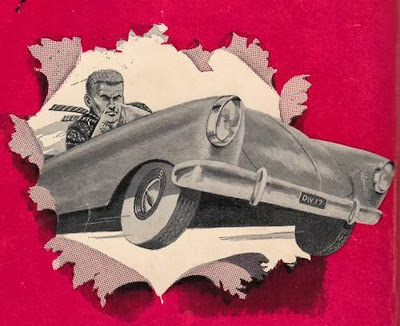 What a name for a character! Anyway, the van derVeer connection came because one of the Novel epics (forget which) stars secret agent Kevin Kar...who also appears in a couple of 60s MSMM stories under the author's real name. I also have an old list of MSMM Shayne story authors and he is listed as the author of two: "Shadow of Fear" (Jan, 1972) and "The Mafia Pays a Ransom" (Nov, 1972).

Thanks, Steve. That was a good catch.