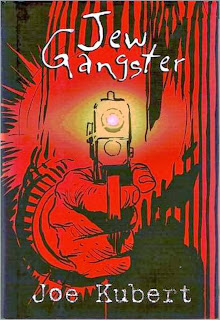 Joe Kubert is one of the first comic book artists I remember becoming aware of because of his distinctive style. Even before I became a comics collector (Christmas Day, 1963, almost fifty years ago), I read assorted comics, including some issues of OUR ARMY AT WAR, so I must have seen his work early on. Within a few years I was a regular reader of his Sgt. Rock and Enemy Ace stories, although it would be a while before I discovered his earlier superhero work. Kubert kept writing and drawing for many, many years and became one of the first creators to produce original graphic novels.

I'd never heard of this 2005 graphic novel until I came across a copy of it recently. JEW GANGSTER, written and drawn by Kubert, is exactly what it says: the story of a young man, Reuben "Ruby" Kaplan, growing up in Brooklyn during the Depression, who falls in with some of the local mobsters and is torn between ambition and greed on one hand and his family and his own moral code on the other.

It's an excellent, fast-paced, noirish story that ultimately doesn't render any judgments. Kubert's black-and-white art is as stylish and effective as ever, with plenty of powerful images including a series of drawings depicting life in Depression-era Brooklyn that serve as chapter breaks.

If you're interested in crime fiction or in some fine work by a comics legend (and I fall into both of those categories), you should definitely check out JEW GANGSTER. It's well worth reading.

Never heard of this before.

Louis (Lepke) Buchalter and the other Jewish & Italian gangsters in Murder, Inc. operated from Brownsville and East New York, Brooklyn. I remember the movie (which would make a good forgotten film) with Peter Falk's breakthrough role as Abe (Kid Twist) Reles.

Apparently this book didn't get a lot of marketing push. I stumbled across it while looking for something else at the library one day. It's excellent, just like everything I've ever read by Joe Kubert.