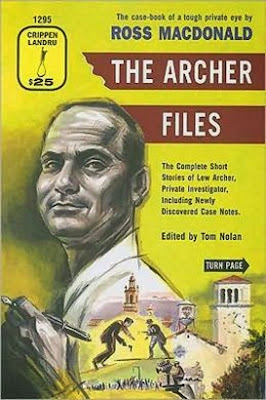 I don't recall the first Ross Macdonald book I read. It may well have been THE MOVING TARGET, the first book in the Lew Archer series. I remember checking it out of the library very early on. But not long after that I joined The Mystery Guild, and one of the books I got as part of my membership was ARCHER IN HOLLYWOOD, a thick green omnibus volume with three novels in it: THE MOVING TARGET (which I'd already read), THE WAY SOME PEOPLE DIE, and THE BARBAROUS COAST, as well as an introduction by Macdonald about the writing of the books. 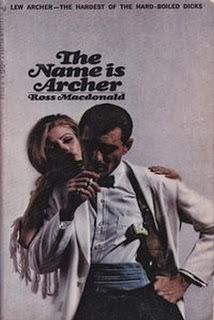 Well, that was enough to make me into a lifelong fan of Ross Macdonald's writing and the Lew Archer series in particular. All the books up to that time had been reprinted in paperback (most by Bantam, a few by Pocket Books), and used copies were readily available. I snatched them up and read all I could get my hands on, including the short story collection THE NAME IS ARCHER, which I remember reading at my aunt's house in Blanket, Texas.

All the stories from THE NAME IS ARCHER—and more—can by found in THE ARCHER FILES, a great collection published a few years ago by Crippen & Landru. That "more" I refer to includes a biographical sketch of Lew Archer by Tom Nolan, who edited the book, and what Nolan calls "Case Notes", which are actually the openings of Archer stories that Macdonald never finished. Some of these fragments are brief, only a page or two, but others are fairly substantial. All of them are entertaining and very frustrating at the same time, because we don't get to find out how the stories end. But Macdonald's prose is as compelling and appealing as ever.

I won't claim to have reread all the stories in THE ARCHER FILES for this post, but I reread several of them and they hold up very well, no doubt about that. One of them, "Gone Girl", opens with a couple of lines I really like and have never forgotten: "It was a Friday night. I was tooling home from the Mexican border in a light blue convertible and a dark blue mood." Ah, that sweet first-person private eye narration . . . I just love it.

If you've never read Macdonald's work and haven't made the acquaintance of Lew Archer, THE ARCHER FILES would be a great place to start. If you're an old fan like me, well, reading these stories took me back to the Sixties and early Seventies, when I was devouring all the private eye yarns I could find, and it was a great feeling. Now I might have to try to find the time to reread some of the Archer novels.

James, I hope you do find the time to reread the Archer novels by Ross Macdonald. A couple years ago I found the time to reread all 18 of them and I was very impressed by how well they stood up to a second reading. He's one of the few detective authors that I place near Hammett and Chandler.

Hey James, I read that same opening in a story called The Imaginary Blonde in the Feb. '53 issue of Manhunt.

The Moving Target was also my first Mcdonald, but I read it AFTER I saw the movie Harper, with Paul Newman. After that I gobbled them up in the Bantam editions with those great covers from the 60's

Bob,
"Gone Girl" is the same story. I assume that was Millar's title and somebody at MANHUNT changed it, but I don't know that. I liked HARPER but didn't see it until after I'd read a number of the books. Those Bantam editions really did have great covers. Most Bantam books did in the Sixties.

I started with The Drowning Pool but my favorite is Sleeping Beauty. I went to the trouble to track down a hardback of that one, I liked it so much.

Ross Macdonald is truly one of the all-time greats! I've read all of his novels except for the last 4 Archers which I ration out, one every few years, like fine wine to savored. Just fantastic stuff!

Nice review. I covered "Gone Girl" under its first title "The Imaginary Blonde" as my FFB entry, and I was also struck by the opening lines. The "dark blue mood" like has to be one of the best in crime fiction, I think.