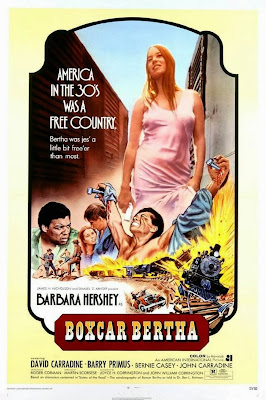 This movie is overlooked in the sense that I wanted to see it when it came out in 1972, but for one reason or another I never did until now. Even though it's set during the Depression, it's very much a product of its times with its not very convincing violence, its abundant nudity, and its theme of the little guy striking back against The Man.

Barbara Hershey, surely one of the most beautiful actresses ever, plays Bertha, the daughter of a cropduster who's killed early on when his greedy employer forces him to go back up in a plane that's having engine trouble. (Every character in this movie who isn't broke or who's an officer of the law is a brutal, greedy, psychotic bastard, by the way. Like I said, it came out in 1972.) Left on her own, Bertha falls in with Big Bill Shelley, a union organizer who's battling against the local railroad line. They get separated, and she winds up traveling with a con man and gambler from up north. Eventually they all wind up together, along with the black mechanic who worked for Bertha's father, and decide to hell with union organizing, they'll just become a gang of criminals instead, so we're off on a lot of Bonnie and Clyde-like action.

Most of the plot is so ham-fisted that it's cartoonish, even though it's supposedly based on real events, and being that this was an American International picture produced by Roger Corman, the production values sometimes are a little less than top-notch. However, director Martin Scorsese (yep, that Martin Scorsese; I believe this was the first movie he directed) keeps things perking along at a pretty entertaining pace, and the film's crudities actually wind up being part of its charm. I probably would have liked it better if I'd seen it in 1972—I definitely would have been more a member of its target audience then—but I enjoyed it now. The day Livia and I watched it, we had started two current movies that turned out to be incredibly boring and wound up stopping both of them after half an hour in which nothing happened. As I said to Livia after we'd watched BOXCAR BERTHA, "At least stuff happened in this movie." Yes, it does. And for that reason, along with the nostalgia value, it's worth watching.

1. You absolutely cannot go wrong - and I know Bill Crider will back me up here - with Barbara Hershey, especially at that stage.

2. Martin Scorsese's first movie was the 1967 Who's That Knocking at My Door? with Harvey Keitel. This was his second.

Thanks for the correction,Jeff. I was too lazy to look up Scorsese's credits. As for Barbara Hershey, I admit one of the reasons I wanted to see this movie in 1972 was because I had seen the pictures from it in PLAYBOY. But despite that I still never got around to watching it until last week.

Have loved Barbara Hershey since the film LAST SUMMER. I think I saw it but it was right in the midst of the diaper years so perhaps not. She has done some good work here and there but never achieved the A list career I expected.

I believe Hershey changed her name to Barbara Seagull around the time she and Carradine appeared in the movie and in the PLAYBOY pictorial. And remained Seagull for several years. Her first major role was the oldest sister in the TV family western THE MONROES. Saw her again recently as Patrick Wilson's mother in INSIDIOUS.

Oddly enough, I just saw her even earlier (than LAST SUMMER) turn in RUN FOR YOUR LIFE as an 18yo sensualist poet, up on charges of obscenity in the latter 1960s when that was rather easier (and RUN FOR YOUR LIFE being the kind of liberal-leaning show that somewhat hamfistedly preferred to be on her side, albeit was almost very effective in portraying how to arrange an upbringing that creates an almost willfully innocently challenging hippie as Hershey portrays in the episode. Usually doing good work, Hershey, and usually, as Patti notes, in projects that aren't really up to her talent...and, interestingly, that tend to play up her own sexuality in one vaguely sinister way (or victimized way) or another. Also, IMDb notes, she's the only woman to have a leading role in two Scorcese-directed films, so far...BB and THE LAST TEMPTATION OF CHRIST...

"Hershey" not really her name, either, fwiw, Fred. Though it's closer than "Seagull"...

Hershey had a major supporting role in the second season of the ABC series ONCE UPON A TIME, playing the mother of the Evil Queen (Lana Parilla, who is also extremely attractive, by the way).

I can buy Hershey as Parilla's mother pretty easily, though I haven't given the ONCE series much attention yet (I did like one or two of Parilla's previous series).

Looking back at the IMDb entry for the RUN FOR YOUR LIFE episode, I see again it was written by the late Carole Eastman, who did a fair amount of scripting in H'wood when not acting, and for reasons that are not readily apparent to me usually used a gender-neutral pseud when writing (usually "Adrien Joyce")...she also wrote FIVE EASY PIECES and PUZZLE OF A DOWNFALL CHILD along with "Saro-Jane, You Never Whispered Again" ("Saro-Jane" being the hippie handle/poetry collection byline for Hershey's character) and two other RUN FOR YOUR LIFEs, among other items, including the lyrics to the charming CREATURE FROM THE HAUNTED SEA theme.

I didn't know it (not having watched either) but according to Wiki Hershey's earliest appearances were in 3 episodes of GIDGET and 2 of THE FARMER'S DAUGHTER in 1965 when she was about 17.

I saw Hershey in a number of movies but didn't credit her with real acting skills until I watched HANNAH AND HER SISTERS.