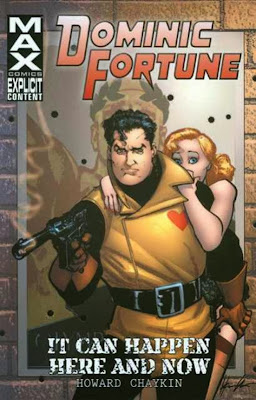 In 1975, writer/artist Howard Chaykin created a character for the short-lived Atlas/Seaboard comics company called The Scorpion. In the two issues under that title produced by Chaykin, The Scorpion was a mysterious, swashbuckling adventurer named Moro Frost who operated in 1930s Hollywood. Due to creative differences, Chaykin left the title after those two issues, and a third issue of THE SCORPION by different creators and featuring a different character was published before Atlas/Seaboard collapsed. The company put out some pretty good comic books during its short life (I read most of them), but my favorite was probably Chaykin's version of THE SCORPION. 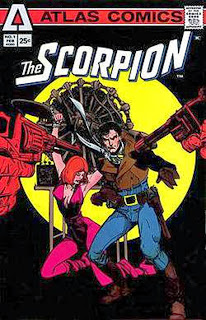 A short time later, the second issue of Marvel's black-and-white magazine MARVEL PREVIEW featured a story called "The Power Broker Resolution" that starred a mysterious, swashbuckling adventurer in 1930s Hollywood named Dominic Fortune. The writer/artist who produced that story? None other than Howard Chaykin. Yep, Dominic Fortune was a reworked version of The Scorpion, with little changed except the character's name. I enjoyed it as much as I had the two earlier issues.

The story didn't lead to much, though. A few years later in one of Marvel's color comics, MARVEL PREMIERE #56, Dominic Fortune surfaced again in a story called "The Big Top Barter Resolution", with art by Chaykin and Terry Austin and script by David Michelinie. This is a fun story that features a pre-Howling Commandos appearance by Dum Dum Dugan. But again it didn't lead to an ongoing Dominic Fortune series.

Over the years other writers and artists used Fortune as a guest star in various stories, filling in his back-story as they went along, something with which I'm not totally in agreement. (The urge to produce "origin" stories is a plague that afflicts mainly Hollywood—the movie version of SOLOMON KANE, anyone?—but it crops up in the comics industry, too. As far as I'm concerned the worst thing that Marvel ever did with Wolverine was to give him a detailed origin. I much preferred the mystery that surrounded his early appearances.)

But back to Dominic Fortune. A few years ago, Chaykin wrote and drew a Fortune mini-series for Marvel's MAX imprint, which means it has a lot of cussin' and nekkid women in it, two things to which I'm not opposed in principle, but it's easy to go overboard on them and that's almost the case here. Not quite. "It Can Happen Here and Now" finds Fortune being hired by a movie executive to ride herd on three drunken, washed-up ham actors who are still valuable to the studio. In trying to keep them out of trouble, Fortune winds up in the middle of a Fifth Columnist plot to assassinate FDR. This story aspires to be a fun romp, and most of the time it is. It's a little too heavy-handed in its politics for my taste, but overall I enjoyed it.

The trade paperback DOMINIC FORTUNE: IT CAN HAPPEN HERE AND NOW reprints the MAX mini-series, the two early Dominic Fortune stories from MARVEL PREVIEW and MARVEL PREMIERE, and a six-part Fortune serial that previously was available only on-line. This story, written by Dean Motter and drawn by Greg Scott, is excellent, a globe-trotting adventure in which Fortune is hired by a young woman who wants him to prove that her sister's deadly leap from the top of the Hollywood sign was murder, not suicide. In the course of the story, Fortune visits Berlin, where he encounters Barons Strucker and Zemo and the young S.S. officer who will become the Red Skull; Latveria, where he meets gypsy healer Werner von Doom and his pregnant wife (no points for guessing who that kid turns out to be); and a tiny country in Africa called Wakanda. There's also a cameo by Howard Stark. The story is a lot of fun for a long-time Marvel fan like me.

Dominic Fortune certainly isn't one of Marvel's top-tier characters, but I like him and I enjoyed this collection. If you're a fan of the character or of Howard Chaykin's work, it's well worth reading.

Had the pleasure to get my copy of this trade signed by Chaykin. Well also yelled at for calling him Mr. Chaykin too.

I think I still have all those Atlas comic books, except for the romance issues (and I regret not picking those up). I hated to see the Atlas line cease. I thought they were pretty good.