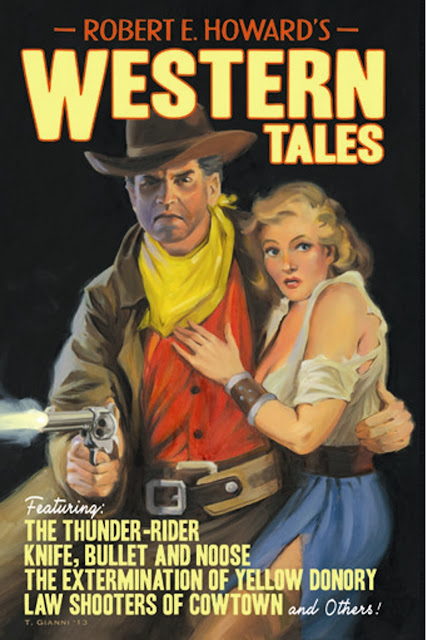 The Robert E. Howard Foundation Press has announced that pre-orders are being accepted for ROBERT E. HOWARD'S WESTERN TALES, the largest collection of Howard's traditional and weird Western fiction ever published. All the details are here, including the fact that I wrote the introduction to this one, with much valuable assistance from editor Rob Roehm. I love Howard's Westerns and think their significance in the genre has been overlooked for the most part. If you haven't read them and want to check them out, or if you've read them and want to revisit them, this book is the best place to do so, if I do say so myself. Plus there's that fine cover by Tom Gianni and the usual high quality production that the REHF Press always provides. This one, not surprisingly, gets a high recommendation from me.
Posted by James Reasoner at 10:30 AM

Don't know the actual Westerns written by REH very well, but the "weird westerns" like "Horror from the Mound" and the posthumously published "Thunder-Rider" are excellent. And Gianni is a wonderful artist who did great work on the Solomon Kane compendium!

Looks terrific! Where did these stories first appear for the most part?

Good stuff for sure. I like his traditional westerns very much.

This looks and sounds a splendid publication any Western follower would be proud to have on his shelves. I hope it succeeds for its promoters. Sadly the production costs on these small-press, short print-run books put many of them out of reach for potential readers ... especially if they live overseas and today's high price of shipping has to be added. Without insurance, I gather this handsome volume would cost me $83!

I still think someone should make a movie of THE VULTURES OF WHAPETON... It would work perfectly just the way it's written. I have the 2 Bison Books volumes of Howard's westerns but this looks like the definitive set. I actually think about 50% of the westerns by him that survive are not that great... but-- when he was truly on his game-- like in VULTURES and a few others-- ol' Bob could really take you there!

Thanks for the tip... I look forward to reading your intro :)