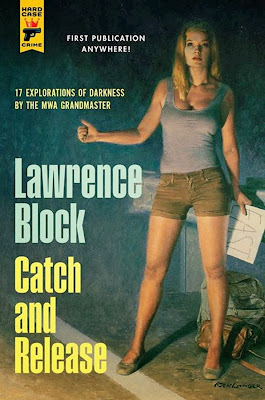 Lawrence Block's new collection, CATCH AND RELEASE, features 17 stories, a newspaper essay, a one-act play, and the usual fascinating story notes about each item. Several of the stories have to do with sports—golf, tennis, and fishing—while many of them feature serial killers and hitmen. And not surprisingly, there's some overlap between the categories. What they all have in common is that they're some of the best written stories you'll find anywhere.

Among the highlights are the novellas "Clean Slate", which became part of Block's novel GETTING OFF, and "Speaking of Greed" and "Speaking of Lust", which were the lead stories in a couple of anthologies that used that title. I love the framing device in the latter two stories, which consists of a policeman, a soldier, a doctor, and a priest sitting around playing cards and swapping yarns, while a fifth character, an unnamed old man, sits next to the fireplace and passes gas. "Speaking of Greed" has a very funny section in it about a literary agent and a young writer, but I'm sure that any resemblance to actual people, living or dead, is, as they say, entirely coincidental.

Several of the stories I'd read before, including two from the Matt Scudder collection THE NIGHT AND THE MUSIC. One of them, "One Last Night at Grogan's", is my second-favorite Block story. For what it's worth, "The Night and the Music" from that same Scudder collection is my favorite Block story and one of my favorite short stories, period, right up there with Irwin Shaw and John O'Hara. The thing about rereading Block is that you start to skim the story, thinking that you've already read it, and then before you know it you've slowed down and read the whole thing again. The prose just draws you in.

CATCH AND RELEASE is available in several formats, whatever your preference, and it's one of the best books I've read this year. Highly recommended.

Back when Larry was doing the Writing seminars (affirmations and all) he and I talked about him coming to Japan to do the seminar, but we never did figure out a way to do it. Too bad, it would have been fantastic. Musta been 25 years ago or so. Yeah. He's a master.