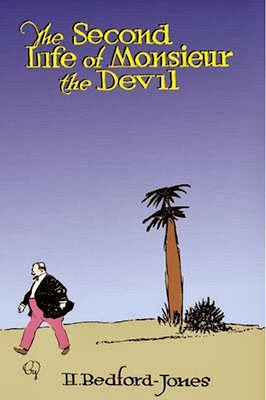 (This is another older post, originally published in slightly different form on May 12, 2006. My hope is that some of you who are fans of H. Bedford-Jones weren't reading this blog then, and so this review will be new to at least a few of you.)


Originally published in the November 1920 issue of BLUE BOOK and reprinted in 2005 by Wildside Press (with a rather whimsical cover), this short novel takes place in French Indo-China, better known to us today as Vietnam. This was during the era when Saigon was called the Paris of the East, and all the characters who appear are either French or American. Much of the action takes place on a privately-owned island off the coast, as a mysterious American adventurer and possible criminal named Smith is plunged into a plot full of intrigue, revenge, and murder. The crooked mastermind known as Monsieur the Devil, sentenced to life in prison, escapes and seeks revenge on the man responsible for putting him there, who happens to live on that private island with – wouldn’t you know it – his beautiful daughter. Along the way there’s a lot of scheming, a few well-done action scenes, and a really suspenseful ending. The pace is a bit more leisurely than you find in some of Bedford-Jones’s stories, but the novel is short enough that that’s not a drawback. As usual with the work of the King of the Pulps, I enjoyed this story quite a bit.

(Update: The Wildside Press reprint is still available and is well worth reading.)