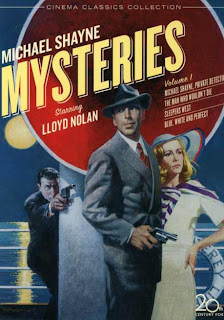 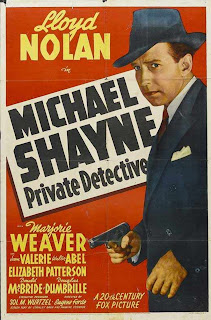 It's been a long time since I watched a Mike Shayne movie. Despite my connection to and fondness for the character, I've never sought out the film adaptations, just seen one every now and then. But I picked up a set of four of the movies starring Lloyd Nolan as Shayne and recently watched the first one, MICHAEL SHAYNE, PRIVATE DETECTIVE.

This movie is based on the second novel in the series, THE PRIVATE PRACTICE OF MICHAEL SHAYNE, and the script is pretty faithful to the book in some ways, working in most of the complicated plot that involves gamblers, horse racing, a spurned blonde, and tampering with the evidence in a murder case. Beautiful socialite Phyllis Brighton, who wound up marrying Shayne in the books, is on hand, too, and very well played by Marjorie Weaver. Shayne plays fast and loose with the law, of course, and bedevils his adversary Peter Painter until he solves the case and drops the killer right in Painter's lap.

But the screenwriters make some changes that don't really help the movie. For some reason they move the action from Florida to California, which wasn't necessary because most of the movie was filmed on soundstages. Cut in a little stock footage of palm trees and the ocean and the whole thing could have passed for Florida just fine. Shayne's reporter friend Tim Rourke and police chief Will Gentry are nowhere to be found.

The main difference between book and movie, though, is in Lloyd Nolan's portrayal of Shayne. Even though the character does many of the same things that Shayne does in the book, for the most part his flippant, light-hearted attitude is very different from the tough, straight-ahead Mike Shayne of the novels. Only occasionally do we get a glimpse of just how unlucky anybody is to have Shayne for an enemy.

One thing Nolan gets right, though, is the character's chemistry with Phyllis. Watching the two of them verbally spar is very reminiscent of the books. Other than that, Nolan's version of Mike Shayne is pretty much the "generic private eye" that Shayne is sometimes accused of being, a claim that I very much disagree with when it comes to the books, of course.

All that said, I enjoyed watching MICHAEL SHAYNE, PRIVATE DETECTIVE quite a bit. The pace is very fast, and the production values are pretty good for a movie that falls somewhere between an A and a B picture. As I recall, this is the only one of the Shayne movies that's based on one of the novels, although some of the others are based on novels by other writers featuring other private eye characters. I'll definitely be watching the others I have.

I was pleased to see these films released on DVD but after watching the first two I found I could go no further.

Part of this was due to my expectations-- I thought I was going to see hardboiled detective stories much like the novels and radio show, and the movies sidestepped any of that to deliver forced, light-hearted mystery tales with little in common with the Shayne I knew.

I hope the films get better as they go, but I get the feeling that's pretty unlikely.

My memory is that they all have the same tone, at least the ones I've seen.

Aren't there a couple of Raymond Chandler stories that morphed into Mike Shayne scripts?

Only one that I recall. The Shayne movie TIME TO KILL was based on THE HIGH WINDOW. That's one I've seen, but it was many years ago.

I've seen four MS movies with Nolan and they were pretty good, even though Shayne walked into a drug store in a white suit and walked out wearing a black one.

I'd kill to see a Hugh Beaumont Shayne.