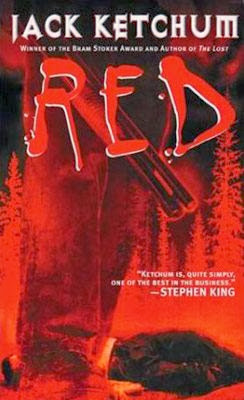 (Yet another rerun. This post originally appeared in slightly different form on June 14, 2006.)


The storyline is pretty simple. Young punks kill old man's dog. Young punks and their families think old man is harmless. They find out otherwise, much to their regret. That's about it. But Ketchum writes so well that the pages just flow by. Despite the blurb from Stephen King on the cover and the word "Horror" on the spine, this isn't a horror novel at all, unless you consider that any novel that's truthful about the human condition is going to have some horror to it. This is more of a mainstream novel, and for the most part, a quiet, subtly written one at that, making its way along deliberately until it abruptly explodes in unexpected directions.

Sure, one plot development is rather hard to accept (you'll know it when you come across it) and some of the plot threads maybe work out a little too neatly, but in this case I'm okay with those things because of all the novel's strengths. This is just an excellent book.

I've been aware of Ketchum's work for years and in fact I own most of his books, but this is the first novel of his that I've read. It almost certainly won't be the last.

(Update: Well, actually, so far RED is the last Ketchum novel I've read. I still own a number of them, replacement copies bought since the fire, but I haven't read any of them yet. Just another example of the old "too many books, not enough time" syndrome. Evidently there's a movie version of this novel, too, made in 2008, that I haven't seen and wasn't even aware of.)

I've heard about Ketchum mostly from the movie adaptation of his novel THE GIRL NEXT DOOR about the torture and abuse of a teenaged girl. I've avoided him like the plague because I thought he was just another writer capitalizing on the public's taste for lurid stories. RED, however, sounds like something I'd be interested in. Thanks for the review and setting me straight.