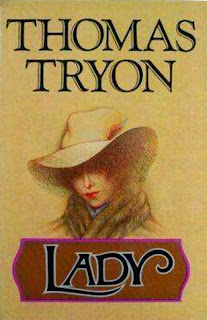 If you spent much time in used bookstores during the Seventies like I did, you probably saw some books by Thomas Tryon. Lots and lots of books by Thomas Tryon, in fact, usually overstock copies of his horror novels THE OTHER and HARVEST HOME, stacked high on top of the regular shelves along with scores of copies of JAWS and AIRPORT. I remember Tryon as an actor, the big, handsome, square-jawed hero of the TV series TEXAS JOHN SLAUGHTER, as well as movies like Disney's MOON PILOT and the unlikely-titled cavalry Western THE GLORY GUYS. I never read any of his novels, though, until now.

THE OTHER and HARVEST HOME were his first two novels, and they were both set in a small Connecticut town called Pequot's Landing. So is his third novel LADY, but unlike the earlier two books, LADY isn't a horror novel, despite some horrible things that happen in it and a few metaphorical mentions of ghosts.

Instead it's more of a mainstream coming-of-age novel narrated by a boy nicknamed Woody, who's about twelve years old when the story begins in the early Thirties. Woody befriends a rich young widow who lives across the town green from him, Adelaide (Lady) Harleigh. Thankfully, although the novel covers more than twenty years in time and Woody grows into a man, there's never any hint of romance between him and Lady. They're simply good friends, that's all. And that's enough.

Although there are a few sinister hints along the way, the first three-quarters of this novel provide an old-fashioned, leisurely look at growing up in a particular time and place, with lots of period detail (but not too much) that makes it feel like a 1940s black-and-white movie. But then the plot takes an abrupt and much darker twist, and things just continue to get worse as the secrets of Lady Harleigh's past are revealed. Tryon doesn't cheat in this twist, either; looking back at the earlier part of the book, the reader can see where he was setting everything up. But the writing skillfully glides right past what's under the surface, making all the revelations in the later part of the book seem even more shocking.

To be honest, LADY is the sort of slow-paced, long-winded book that I normally find very hard to read. Tryon even indulges in the old "Had I but known" bit. But here's the thing: he makes it work. I got caught up in the story and had to find out what was going to happen. The characters are all vividly drawn, even the unsympathetic ones, and I wanted to know how things were going to turn out for them. For those of you old enough to remember them, LADY is from the same school as PEYTON PLACE and KING'S ROW, long, lush novels with large casts, soapy plots, and at least a skin of realism.

Originally published in 1974, this novel is available again in an e-book edition, which is what I read. I thoroughly enjoyed it, enough so that I might read some of Tryon's other novels. I wouldn't mind paying another visit to Pequot's Landing. There has to be a reason all those copies were stacked up on top of the used bookstore shelves back in the Seventies.

I really liked THE OTHER when I first read it. I'll have to look for LADY. Nice review!

I read The Other as a youngster, way back in the day, secretly relishing the fact that the author starred in the 1958 flick 'I Married a Monster From Outer Space'.

Addicted to 1950's sf-monster movies as I was, this was actually one of the novel's selling points for me.

It's a surprisingly good movie, too.

I always wondered about this one, James. I read THE OTHER and HARVEST HOME back in my early teenage years, when his books like you say were everywhere. I guess the jacket copy on this one just didn't grab me like the other two, but I might just give it a read soon. Thanks for reviewing it.

Like Peter, I wondered about this title, even picked it up at a library book sale once. I saw THE OTHER on TV with my mom one dark night and read the novel the following week. Spooooooky. But this one remained forgotten indeed. Going to dig it out now.

One of the loveliest stories ever.