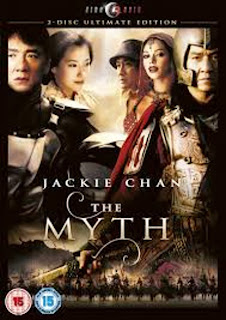 It’s difficult to categorize Jackie Chan’s THE MYTH. It’s part ancient Chinese historical epic, part modern-day archeological thriller, part fantasy, and part knockabout martial arts comedy of the sort that Chan is best known for. He plays duel roles: a Chinese general assigned to protect a princess, and in good old Roy Rogers fashion, a modern archeologist named Jack Chan. It’s obvious from the first that the storylines are going to wind up being connected, but that’s not enough for the filmmakers. They also throw in a bunch of levitating priests, hollowed-out mountains, an anti-gravity machine, and immortality pills, with most of the action taking place in, to borrow a line from Woody Allen, a fictional-but-real-sounding country. Believe it or not, though, by the end of the movie everything gets tied together into a somewhat coherent plot.

Speaking of believing it or not, this movie requires a considerable suspension of disbelief. More than once while watching it I said out loud, “Oh, come on!” But if you can just go with it and not ask for things to make much sense, it winds up being pretty enjoyable. I like most of Jackie Chan’s movies and THE MYTH is no exception. The historical parts of this film are probably the best, featuring some nice battles staged with what appear to be hundreds of actual stuntmen and extras, rather than CGI. Chan plays it straight in these scenes and does a fine job.

Overall this one gets a recommendation from me, with the reservations that you probably ought to be a Jackie Chan fan to start with and that sheer goofiness in a plot doesn’t bother you too much.
Posted by James Reasoner at 5:30 AM

I don't think I have ever seen a Jackie Chan movie. Unless there was one that was a comedy?

Maybe you're thinking of SHANGHAI NOON with Owen Wilson. That was the first Jackie Chan movie I saw, and still probably my favorite.

You probably ought to be a Jackie Chan fan to start with. Check!

Sheer goofiness in a plot doesn’t bother you too much. Check!

Are the Overlooked Films links collected somewhere? I'd like to include the link in my own posting.