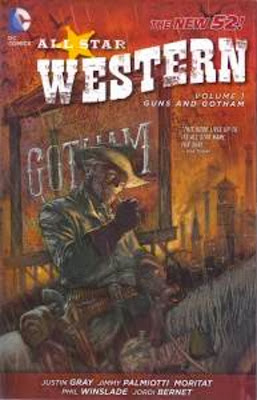 I'm a longtime Jonah Hex fan, so naturally I'd have some interest in the current comic book series featuring him, ALL STAR WESTERN. I picked up a trade paperback reprinting the first six issues of that title, even though I'd heard mostly negative things about it, most of them centering around the fact that the stories are set in Gotham City in the 1880s, rather than out west.

Actually, that doesn't bother me too much. There's a long tradition in fiction of sending Western heroes back east. Longarm and The Trailsman have both gone to big eastern cities to have adventures. In one of the books I ghosted I sent the hero to both Chicago and Boston before having him go back out west to wrap up the story. So as far as I'm concerned, sending Jonah Hex to Gotham City on the trail of some fugitive outlaws is fine. So is teaming him up with Dr. Amadeus Arkham, who sometime in the future will build a certain asylum. It's nice to see some of the ancestors of other famous Gotham citizens, as well.

The stories in this collection were written by Justin Gray and Jimmy Palmiotti, who chronicled Hex's adventures in his previous title for quite a while. They send Hex and Arkham after a serial killer known as the Gotham Butcher and then get them involved in a case in which hundreds of children from the poor part of town have disappeared. Both are decent yarns. Unfortunately, the art by a single-named artist billed as Moritat doesn't appeal to me at all. Hex looks good here and there and there are some impressive full-page action scenes, but overall it's just not to my taste.

This collection also includes a couple of back-up stories featuring El Diablo (who originally appeared with Hex in the old WEIRD WESTERN TALES comic book many, many years ago) and a new character known as The Barbary Ghost. These stories do take place in the West, and they're pretty good ones, although the Indian curse/zombie plot in the El Diablo yarn strikes me as a little overdone. I like the art in these stories—Jordi Bernet on El Diablo and Phil Winslade on The Barbary Ghost—much better.

Overall, I found enough to like in ALL STAR WESTERN: GUNS AND GOTHAM that I'll probably read the next volume. I still prefer the original Jonah Hex stories by John Albano and Tony deZuniga, but those days aren't ever coming back, are they?

To my mind the thing that makes the DC’s ‘New 52’ version of Jonah Hex worth reading is the character of Hex himself. He remains the same scurvy scoundrel through all manner of unlikely plot developments.

A recent story had him teamed up with a time-travelling Booster Gold, a pretty silly contrast to the violent, dusty tales of western action Hex has featured in over the years.

Still, when Booster becomes unstuck in time and commences falling through a swirling wormhole, taking Hex with him, Hex demands to know what’s going on.

Stuff like that cracks me up enough that I keep reading.

Unfortunately the current storyline in DC's Allstar Western has brought Jonah Hex into our time and is apparently going to leave him here for the foreseeable future. A little of that goes a long way.

Yeah, I don't care for that idea at all. It may be time to dig out my SHOWCASE volume of those early stories and read some of them again.

In fact, I find myself wavering on the verge of taking a long hiatus from comics (except for collections of older stories) like I did in the Nineties. I've already cut my comics reading in half over the past few months and find less and less to interest me. If Marvel relaunches yet again, as I've read that they're going to, that may be the last straw. Luckily, there's still lots of stuff from the Fifties, Sixties, and Seventies I either haven't read or would like to read again.

As reviled as DC's Mad Max-inspired HEX title was, it's a wonder they chose to go back to that same well - more or less. Yet it seems to be comic book tradition: Marvel once brought the Rawhide Kid into our time with Hawkeye to meet the Avengers.

Yeah, I didn't care for the Mad Max version of Hex, don't need to see it or anything similar again. Marvel just had The Rawhide Kid, The Two-Gun Kid, and Kid Colt appear in an issue of The Hulk's title (whatever it's called these days), and the story by Mark Waid was at least passable, although I didn't care for the art. I wonder if there are Essentials editions of The Rawhide Kid and Kid Colt. I might have to look into that. Never was as big a fan of The Two-Gun Kid, although I read his book fairly regularly.

That's where I am, James. Almost completely out of the new comics scene, but I buy a lot of reprint volumes. There is an Essential Rawhide Kid book.

Charles,
I was looking through my books this afternoon, and lo and behold, there the ESSENTIAL RAWHIDE KID. I have it and had forgotten it even existed! I may be digging it out and reading it soon, but I'm part of the way through a couple of other Essentials volumes I want to finish first (TOMB OF DRACULA VOL. 1 and SGT. FURY AND HIS HOWLING COMMANDOS VOL. 1 -- and man, those early Sgt. Fury stories with Kirby art are wonderful).

I'm still enjoying Waid's DAREDEVIL, Kieron Gillen's IRON MAN, and Jason Aaron's THOR. Ed Brubaker has a new series starting soon, VELVET, that I plan to read. But I've given up all the Avengers books and all the Spider-Man books. Rick Remender is about to run me off from Captain America, and I'm not that fond of what Fraction has been doing with the two FF books. His run on HAWKEYE has been pretty good, though.

I became quite a fan of the then new Hex series. Quite grim stories in the italo-western vein. I bought the trades.

But I had zero interest when they roped Hex back into the "New52" continuity. Hex as just another satellite of the Batman Family in Gotham instead as a drifter in the west? Issue after issue? One of the selling points of Hex for me was the distance to the current DCU stuff. Now we have Booster Gold of all things. I'll pass.

I also buy much less comics then I used to. Too expensive for a too small content, ever revolving artists and writers, neverending cross-overs which stories don't even merit one issue. Nothing sticks anymore, the constant re-numbering nonsense.