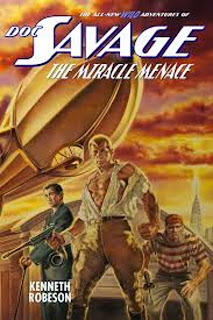 Allow me to begin this post, as I so often do, by wallowing in nostalgia. When I was in high school, there were two World War II-era army barracks that had been brought in and set up behind the main buildings on campus. One was used for the shop and mechanical drawing classes, and the other was our study hall.

Study hall was an actual class you signed up for in those days, and I always took it. Not that I used it to study or work on assignments except very, very rarely. No, I took study hall because it was 50 minutes in the middle of each day that I could use to read whatever paperback or library book I was reading. I was a fast reader, too. I could get through half of a 128-page Gold Medal paperback in that time and then finish it off at home that evening.

Of course, when you stop and think about it, considering the way things turned out, I actually was studying for my future profession. I just didn't know it at the time. I was just having a great time reading.

And at least once a month, the book I'd be reading was the latest Doc Savage reprint from Bantam. I knew the day the new releases arrived at the store where I bought most of them, and that was always my first stop after school on those days. I have vivid memories of sitting in that old army barracks and galloping through the adventures of Doc, Monk, Ham, Renny, Long Tom, and Johnny.

Well (and there actually is a point to this reminiscing), reading THE MIRACLE MENACE, the latest Doc Savage novel by Will Murray writing under the Kenneth Robeson house-name, made me feel exactly like I was sitting in study hall again after all these years. It's that perfect a recreation of the original series. If you read the trade paperback, as I did, you can see that even the page layout is just like those old Bantam paperbacks.

When I first read the plot description of this one, I thought it sounded very Dent-like (Lester Dent being the author of the original Doc Savage novels published in the pulp magazine of the same name). Weird things are going on around the small town of La Plata, Missouri, which just happens to have been the hometown of Lester Dent, by the way. A deserted Victorian mansion sitting by itself in the middle of some thick woods has the odd habit of disappearing into thin air and then reappearing again. A murderous midget is on a killing spree. A group of traveling evangelists is in town, but they're not your average preachers. There's a rumor going around that Christopher Columbus, the discoverer of America his own self, is not only still alive but is in Missouri, of all places. A stage magician named Gulliver Greene and his assistant Spook Davis are in the middle of this mess, and so are Doc Savage and his aides.

For much of the book, it appears that the two main storylines, the disappearing mansion and the mystery of Columbus, are unrelated, but I don't think it's giving away too much to reveal that eventually everything that's going on ties together. Once it does, the story races along with almost non-stop action. Murray throws in a number of plot twists, too, almost right up until the final page, and he does it all in prose that's a pitch-perfect pastiche of Lester Dent's style. The book even serves as a sequel of sorts to one of the original novels and features the return of a character from that yarn.

I had a grand time reading THE MIRACLE MENACE. If you're a long-time Doc Savage fan like me, you won't want to miss it. Highly recommended.


(And as an aside, one of those old barracks buildings is definitely gone now. There's a brick building of the same shape and size sitting where the other one was, the one where I had study hall, and I can't tell if it's the original barracks building that was remodeled, or if it was built from the ground up. The school is now one of my hometown's two junior highs, and I used to park right outside that building while waiting to pick up my daughters while they were going there. I always thought about those days in study hall and all the great books I read. When you're a reader, it all ties together, doesn't it?)

Email ThisBlogThis!Share to TwitterShare to FacebookShare to Pinterest
Labels: Doc Savage, Will Murray

I'm behind on my new Savage. I'm still on the King King one, which is pretty darn cool. Great review. I'm lining this one up. You read the comic version a few years ago w/Savage, The Bat-Man, etc.?

I'm even further behind on these than Scott, but I'll get there. As for the reminiscing, I love it and always am happy to see more of it! I'd buy and read your autobiography in a heartbeat.

I'm afraid my autobiography would be pretty boring. Lots of "And then I read . . ." followed by lots of "And then I wrote . . ." But I'll admit, I like doing these little bite-sized chunks of nostalgia. Maybe I'll gather some of them up into a book someday, when I get enough of them.

Oh, and lots of "And then I wrote something else, but I'm contractually obligated not to tell you what it is."