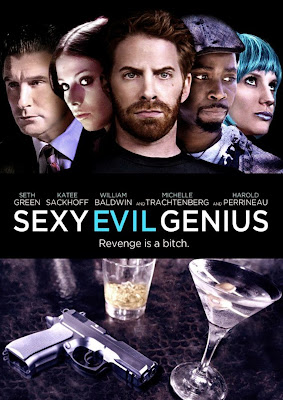 I'd never heard of this movie until someone I know mentioned it favorably. I looked it up, saw that it has Seth Green, Katee Sackhoff, and Michelle Trachtenburg, all of whom I like, in it, so I thought we might as well give it a chance.

First of all, I don't care for that title. It just sounds clunky to me. But the premise is intriguing: several people are summoned to a bar in Los Angeles by an ex-lover, and when she's late showing up, they sit around and trade stories about her. She's the sexy evil genius of the title, and as the stories about her continue, it's revealed that she killed a man and has spent time in an institution for the criminally insane.

Or is all that just one of the elaborate fictional histories she likes to create for herself?

Yeah, this is one of those movies where you can't trust anything you see or hear, and that becomes even more true when Nikki (Katee Sackhoff) finally shows up at the bar with her current lover. Most of the movie consists of this group of people sitting around a table talking and throwing various theories about the truth back and forth. If you're going to make a movie that's almost all dialogue and little action, it had better be damned good dialogue. For the most part, it is. When things finally start to get intense, the movie creates some genuine suspense. There's not really enough to call it a thriller, but I didn't lose interest, either.

The acting is good all around. The twist ending seemed a little weak to me, and the whole plot is one of those where you have to squint your eyes and hold your mouth just right for it to make sense, but the movie moves right along and is pretty entertaining. Don't expect a great film, but SEXY EVIL GENIUS is worth watching.

Sounds awful to me.

Ditto. I dislike Seth Green and can take or leave the others.

I would say that this is one of those "love it or hate it" movies, but that's not really true. I thought it was okay but certainly didn't love it.

Ugh. Sounds like a Usual Suspects and Tarantino ripoff.