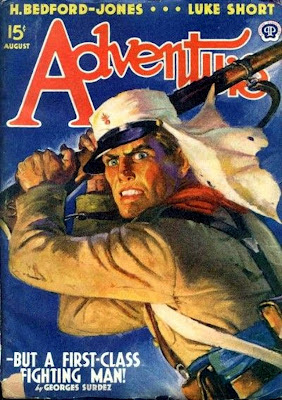 Here's a classic French Foreign Legion cover, a genre that's almost completely forgotten today. A number of years ago I tried to sell one of my editors on the idea of a French Foreign Legion novel, but no luck. Now, of course, I could write one whenever I wanted and publish it as an e-book, but finding the time is the problem. Maybe someday.


At any rate, this looks like a fine issue. In addition to the Legion novel by Georges Surdez, one of the best writers in that genre, it also includes short stories by the great H. Bedford-Jones and reliable pulpster Albert Richard Wetjen and part of the serialized novel "Spy of the North" by Luke Short, which was later reprinted as BARREN LAND MURDERS and BARREN LAND SHOWDOWN, the title under which it's best known. I don't think it's in the top rank of Short's work, but it's worth reading.
Posted by James Reasoner at 7:00 AM

Very nice to see a reminder of the Foreign Legion genre, James. Like you, I tried to get a Legion-based series off the ground many years ago, but there was just no interest in it. I don't know why -- the Foreign Legion yarn has always filled me with excitement. I would love to read and follow such a series, given half the chance! The Foreign Legion genre enjoyed a brief moment of popularity here in the 1950s, and every so often COMMANDO will publish a Legion story. I did one myself ... although that was about the lesser known Spanish Foreign Legion.

I think I'm going to add a Legion novella to the list of original e-books I'm going to write when I can find the time.

The pulps used to be full of Foreign Legion stories. ADVENTURE, ARGOSY, BLUE BOOK, SHORT STORIES, all carried stories and series about the Legion. Soon there will be a collection of Theodore Roscoe stories reprinting some of his best Legion work from ARGOSY.

The Legion still fascinates and puzzles me. Men used to join up for a 5 year hitch, getting paid pennies a day for dangerous and hard work. Desperate men for a desperate job.

James and Ben, I hope you do write and self publish some Legion novels, as I've never read one. The genre sounds fascinating, though. I'll have to hunt some down. What works do you recommend?

Keith, the collection of Theodore Roscoe's stories that Walker mentions would be a great place to start when it comes out later this year. Roscoe's series from ARGOSY featuring the Legionnaire Thibault Corday is one of the best. Georges Surdez is the other pulp author most identified with Legion stories, and he wrote at least one Legion novel, THE DEMON CARAVAN, that Dell published in 1951. Copies of it can be found on-line pretty inexpensively. There are a number of collections and novels by J.D. Newsom, another pulp author who specialized in Legion stories, but they're pricier for some reason. I have the Surdez novel and one of the Newsom collections but haven't read them yet. A lot of other pulp authors did Legion stories from time to time, such as Robert Carse and F.V.W. Mason, but Roscoe, Surdez, and Newsom are the big guns in the genre.

Thanks for the info, James. I'll definitely look for some of these.

I'm a fan of the genre, too, as well as the toy soldiers representing the FFL. Looking forward to your book, assuming you find the time for it.